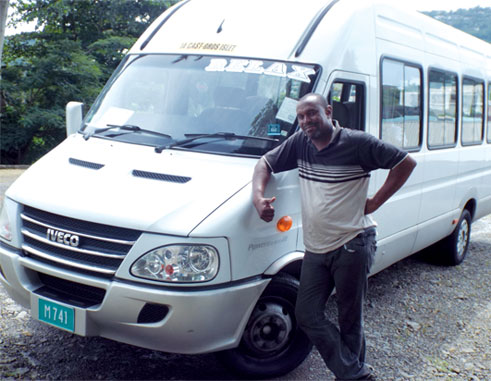 A step towards improving one major aspect of public transportation has been met with mixed responses as three new not so minibuses have been revolutionising the face of service for the past seven months.

The German made IVECO mini coach which seats 20 persons at a time including the driver has left the public split between those who say they would rather be caught dead than ride the particular bus and those who are willing to wait for extended periods of time to get on board and ride in comfort.

Three of the vehicles were introduced to St. Lucia by JQ Motors who sold them to private owners. Currently, two ply the Vieux Fort – Castries route and the other along the Gros Islet route.

Mosy of the minibuses now in use in St. Lucia are 12 and 14 seaters.

Lambert Craston better known as Smiley, 43, has been a minibus driver for nearly 20 years and can be seen on a daily basis carrying commuters along the Gros Islet route.Craston told The VOICE that it was about time that a bigger and more comfortable vehicle was used on the roads.

The 20 seater which has been appropriately named; “Relax” is decked out with a number of features including reclining individual seats, overhead bag storage, individual personal lights and AC and curtains to shield commuters from the scorching rays of the sun.

The bus driver said, “A lot of people are excited to travel in the new vehicle as they are looking for that new experience. Many passengers who have boarded like the idea and say that they feel like they’re in an aeroplane but there are negative responses where passengers have complained about the vehicle not having emergency exits and asking in case of an accident, how will they get out? But then these are just the people looking for negative things to say”.

Although he is not the owner of the vehicle, Craston said he feels happy to be a part of the much needed change.

“We must always have change for the better. Our population is increasing and if we can have bigger buses to carry more people at one time, it would make things easier to transport people up and down the roads. A lot of people are not ready for change. How can you say that you don’t like the bus if you’ve never experienced it?”

Craston said it’s not just the passengers who oppose the necessary change.

“Other bus drivers figure that I make more money than they do since I have a bigger bus so that carries a certain amount of negativity towards me but then again a job is a job. I’ve been in situations where other bus drivers have deliberately prevented me from stopping at bus stops to pick up passengers out of fear that I will pick up the majority and leave them empty”.

He said the tiny vehicles that the masses have grown accustomed to should be assigned as private vehicles allowing bigger buses to become more frequent. Craston is of the strong belief that with the introduction of more similar buses on the roads, Saint Lucians will conform eventually.