Trade unions have come a long way being the managers of discontent between workers and their employers. Not only have they made life better for workers under their care, they have also improved relations in the country between employees and employers. There is no doubt that in today’s highly technical world the trade union is becoming more and more relevant, effectively contributing to the welfare of working Saint Lucians and the development of a better Saint Lucia.

One trade union which has withstood the test of time being in the forefront of the struggle for workers’ rights is the National Workers Union (NWU) arguably the largest public sector trade union in the country. One can safely say that today it is a force to be reckoned with as it has the muscle; it has been said in certain quarters, to take on the largest employer in the country, namely the Government of Saint Lucia.

Founded by Tyrone George Maynard and launched in August 1973, the NWU, has changed lives throughout the island since its inception. It is one of the most prominent labour organizations in Saint Lucia and boasts a total of 5000 plus members.

Like many other companies, the NWU worked its way from the ground up.

According to the Union, “After years of careful planning, holding of many secret meetings with workers throughout the country and the publication of a Labour Journal captioned ‘Workers Voice’, Tyrone George Maynard, an Industrial Relations Specialist with tremendous background experience in the field, felt the time had come for one to take full responsibility for changing the industrial landscape of Saint Lucia. Consequently, the National Workers Union was formed.”

According to the NWU, “The first six months of the organisation’s operations saw a new dimension to the industrial relations process in the country. The NWU initiated ‘Workers Talking Night’ every Tuesday on Radio Saint Lucia. The programme was very informative and dealt with workers’ rights and other industrial relations topics. About 24 programmes were completed. That thrust exposed the Union to a new trend in public relations out of which workers and prospective new members were exposed to a new awareness.”

As the founder of the NWU, Maynard resolved back then to make this new labour entity work to change the industrial relations landscape in the country.

The first six months of the organisation’s operations saw a new dimension to the industrial relations process in the country. For instance, Employees of Texaco (West Indies) Limited, based at La Toc became the first new unit of the NWU. At the time 12 workers were employed with that company. The move was strategic because Texaco (West Indies) Limited ran a fleet of tank wagons which distributed diesel and gasoline to gas stations around the island, delivered propane gas to consumers at large hotels and also operated a refuelling station based at Vigie Airport. Many aircrafts had to access the company’s services at the airport.

This meant that if this small union had to go into action then, it could have refused to fuel aircrafts and not distribute gasoline to the stations around the country. When the NWU applied for trade union recognition the company requested a poll which it won handsomely. It quickly engaged in formal negotiations out of which it obtained a 30% general wage increase along with fringe benefits for the workers. This was a good starting point since at the time the weekly wages of a labourer with the company were EC$40.00, an aviation crew man EC$60.00, a driver EC$70.00 and a mechanic EC$80.00.

The NWU’s next move was to make regional and international contacts by becoming affiliated to global trade union organizations. These links enabled the union to receive financial and technical assistance from overseas organisations. Access to these resources facilitated the holding of seminars, each with about 30 participants coming from Castries, Babonneau, Dennery, Soufriere and Vieux Fort. The sessions were multi-lingual, in English and Creole/Kweyol. Sam Flood, a very popular Creole/Kweyol specialist assisted the NWU.

The Strategy Committee of the union undertook a survey among workers in the agricultural sector. Results revealed that these workers were badly paid and the lowest paid in the country. They never enjoyed fringe benefits, protective necessities and were paid the Holidays with Pay at Christmas time as an annual bonus. A decision was taken to mobilize the agricultural sector.

Estates like Marquis, Babonneau, Ferrands, Mamiku, Fond, Patience, Fine Timbers all felt the industrial wrath of the union. The Dennery estates in the Mabouya Valley, owned by the Barnards, were left for last as they were white and repressive, as noted by the NWU. As a result the union had to retreat as it had not built the kind of armoury that would have been required to go into a successful battle with the Barnards.

As the representational character of the movement seems to be changing, the NWU at the time was well on its way to establishing new operational structures that would enable it to face emerging challenges and be better prepared for the coming decades.

These early years underscored that Maynard’s ambitions were great.  Described as a visionary, Maynard wanted the NWU to have its own home and after many years of paying rent and occupying four different office locations, his dream finally came to fruition in September 2019. It was a sweet victory for the NWU and an unforgettable moment for its founder who has been renting premises since 1973.

The NWU, which was once located on Bourbon Street in Castries now calls UNITY HOUSE located at #7 Maurice Mason Avenue in Sans Souci, its home. 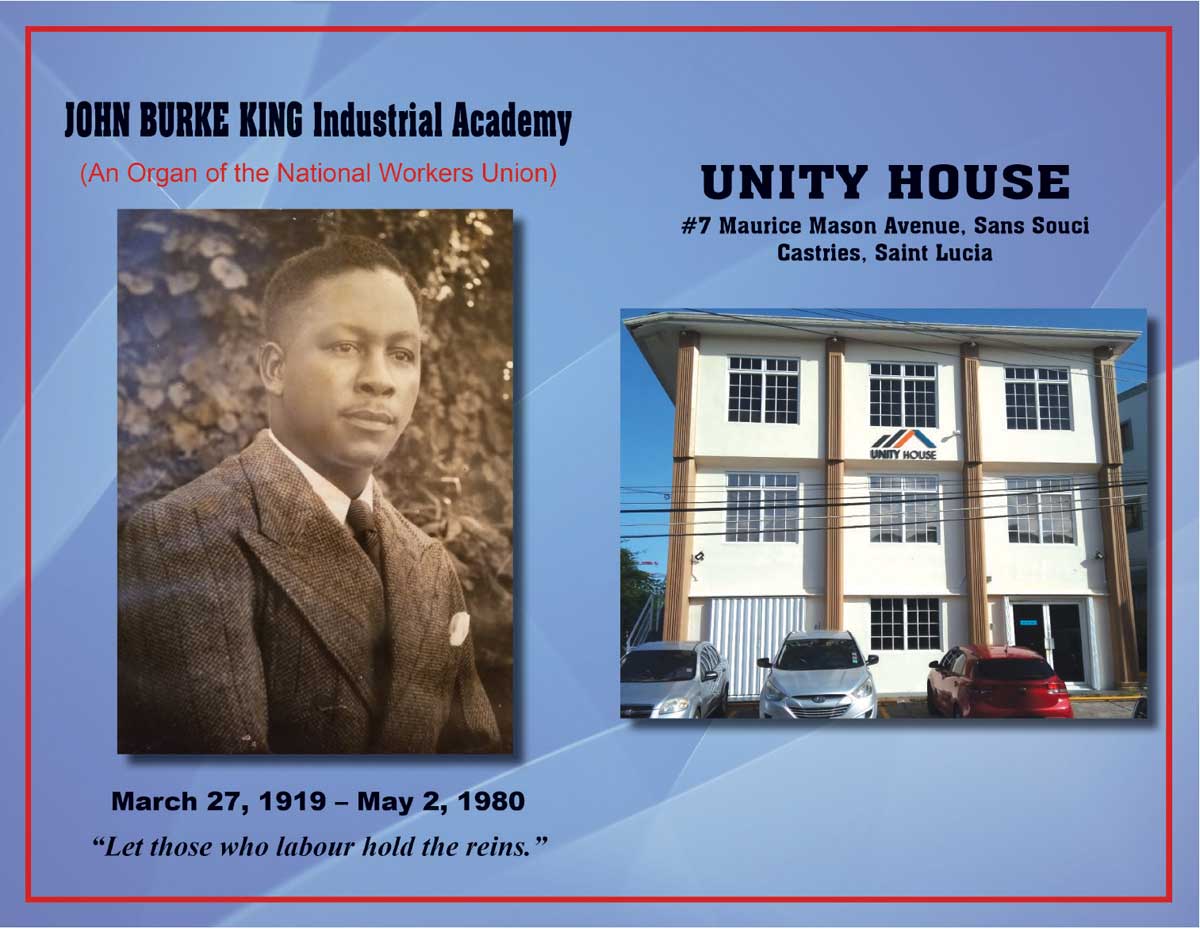 “This name was adopted through unanimous approval of Resolution #3 at the 2020 NWU Annual Congress of Delegates, The three floor layout of the building has allowed the Union the space to have its offices on the first floor, rent the ground floor and configure the top floor for conferencing purposes. With a vision statement as ‘Continuously striving to combat exploitation’ it would naturally follow that educational empowerment would be factored in the plans of the organization,” the Union said in a statement.

According to the NWU, since its existence, educational and training activities have been undertaken as per the mandate given in its constitution. For this to occur, however, the NWU has had to source outside venues due to its inability to hold them in house. Thankfully, this has changed.

“In seeking to fulfil one of its strategic objectives which states ‘to work efficiently at finding sustainable, popular solutions to all matters of an industrial relations nature facing the NWU and Saint Lucia’, the Leadership of the organization envisioned the establishment of an educational arm on its compound. This would provide a base for well-designed activities focused on empowering its membership and the wider community,” the Union noted.

“With that in mind the groundwork was set for the establishment of the John Burke King Industrial Academy (JBKIA) on the top floor of Unity House,” the NWU added.

A soft launch was held in November 2020 at the NWU’s Annual Congress of Delegates and the unveiling of the picture heralding the launching of the Academy was done by the daughter of deceased stalwart Trade Unionist, Retired Assistant Superintendent of Police, Mrs. Chriselda Branford.

The JBKIA will be governed by a Board of Directors made up of seven individuals namely Nigel A Fulgence (Chairperson), Solace Myers, Johann M Harewood, Clement Prospere, Kimani Pompelis, Mary Florton, Batson Fontenelle and Tyrone G Maynard (Advisor to the Board).

“The Academy will be responsible for organizing and hosting training programmes for workers. It will tap on diverse resources of the local private sector and public sector. It will source regional and international contributions and expertise from individual and organizational affiliates with whom we have long standing Trade Union relations,” the NWU stated.

John Burke King was a long-standing General Secretary of the St Lucia Workers’ Union (SLWU). According to the NWU, the space is organized with facilities for use in educational programmes and is open to government and private sector organizations with a focus on education.