The fight for human life is not a new one. This pandemic has put the world on the defensive and has sent us into the mother of all wars for the preservation of our economic and social survival. Our mental health has also come under attack and spiritually, many hang on by a thread. Meanwhile, as the debate rages on about the pros and cons of vaccination, history will show that our physical health can rebound, because of the advent of the vaccine. 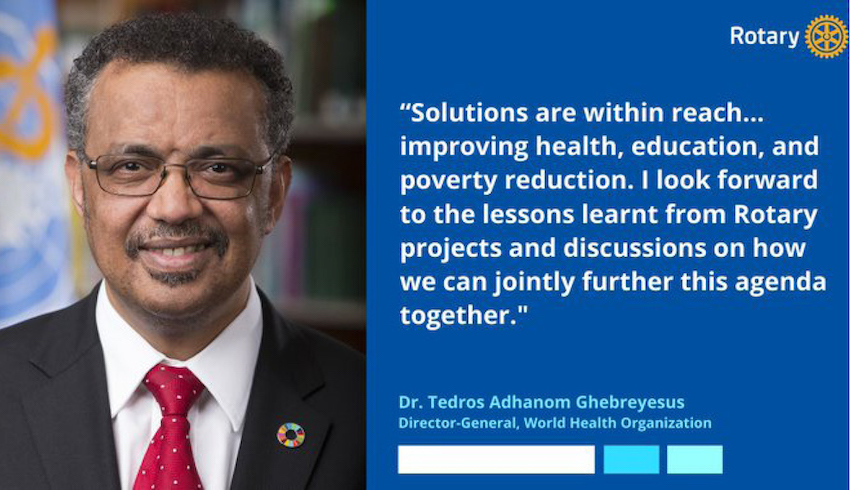 Rotary was a pioneer in the fight against polio and started efforts in 1978 with a very ambitious goal to reach a polio-free world.

Rotary launched PolioPlus in 1985 and was a founding member of the Global Polio Eradication Initiative in 1988. Through decades of commitment and work by Rotary and its partners, more than 2.5 billion children have received the oral polio vaccine. Rotary members have contributed more than $2.1 billion and countless volunteer hours to protect nearly 3 billion children in 122 countries from this paralyzing disease.

So what is this dreaded polio disease?

Polio, or poliomyelitis, is a disabling and life-threatening infectious disease caused by the poliovirus. The virus spreads from person to person and can infect a person’s spinal cord, causing paralysis. Generally the virus affects children under the age of 5 years.

Working hand in hand with the World Health Organization, Centers for Disease Control and Prevention, UNICEF, the Bill and Melinda Gates Foundation and local government agencies, Rotary anticipated that polio would have been eradicated by 2005. When that did not happen, the goal was extended to 2010, then 2015, and again to 2019.

Today, polio remains endemic only in Afghanistan and Pakistan. Realistically however, as long as polio remains a threat in one country, all countries are at risk, as, with the advent of new technologies, polio is literally a plane ride away. The goal to continue working to keep other countries polio-free is not just crucial, it is a matter of choosing life over paralysis. If all eradication efforts stopped today, within 10 years, polio could paralyze as many as 200,000 children each year.

Today, all of the agencies involved continue to work towards the revised deadline of December 2023 for a polio-free world.

What has history taught us about the roll-out of a comprehensive vaccination campaign?

The last reported case of polio in the Americas was in 1991, and by 1994 the Western Hemisphere was declared polio-free. India’s first National Immunization Day (NID), at which 82 million children were vaccinated, was held in 1995, and in 1996, Nelson Mandela officially launched the “Kick Polio out of Africa” campaign.

Vaccines were given at toll booths, aboard public transportation, at schools, at makeshift booths on street corners, at marketplaces or anywhere there was a gathering of adults with children.

Even in Saint Lucia, the story tellers recount the history, when children in schools, between 1977 and 1978, were administered the polio vaccine en masse.

By 2002, fifty one (51) European countries were declared polio-free, and in 2006 four years later, the only polio-endemic countries were Pakistan, Afghanistan, India and Nigeria.

What is the cost of fighting polio to Rotary?

Over the last ten years, an estimated US$15 billion has been spent in the vicious fight against polio. While one dose of the polio vaccine costs just 15 cents, the investment in health care workers to deliver the vaccines, plus ongoing awareness campaigns, are more costly. Rotary has managed to consolidate its efforts and in forming essential collaborations, has accumulated much needed funding for the global effort of combating polio.

Rotary work at the district level:

Polio is only one of many of the global causes that Rotary has championed since its formation over a century ago. Without the support on the ground in local clubs, these efforts would be significantly watered down. The strength of local clubs is magnified across the region, and all of this is crystalized under the direction of the District Governor. Lisle Chase is the current District Governor, responsible for some 73 clubs in 17 countries stretching from Aruba in the north to Trinidad in the south. This is District 7030, home to about 2300 Rotarians. Rotaractors, Interactors and Early-actors are also part of the family of Rotary.

Over the next few weeks, through series of articles, the work of these organizations and their relationship to Rotary International will be explored. This is critical, ahead of the hosting of the District Conference right here in Saint Lucia, virtually, from April 16 – 24, 2021.