WITH persistent calls for an overall revamping and development of the local music industry a local music house production unit is set to make a difference.

Entertainment Sounds Production [ESP] is the latest music house to open for business in Saint Lucia—and their ultimate goal is to harness the talent of local artistes. 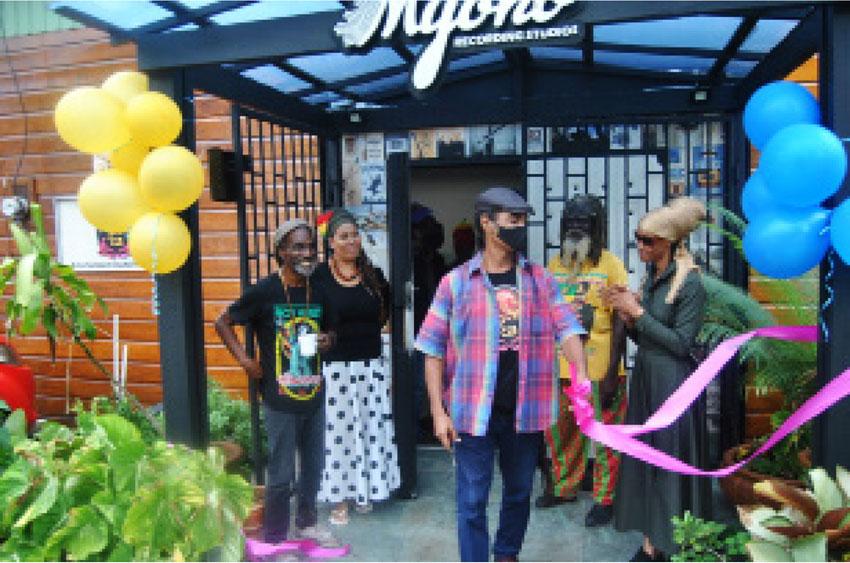 The combined input of Lyttleton Valmont and his spouse Empress Illa has borne fruit as was evident at this week’s official launch of ESP’s – Myoho studios, located at Bisee.

An array of some of the island’s top musicians as well as budding artistes turned up to give support to the initiative.

Valmont has always had an interest in music from his boyhood days and this latest project is testament to the many years that he labored to get this venture off the ground.

In his earlier days, the young Valmont hung around with the likes of local musical icons such as Luther Francois and Emerson Nurse. He was an avid listener to musical greats such as Jimmy Hendrix, Bob Marley, The Beatles, Rolling Stones, Earth, Wind and Fire, Curtis Mayfield and others. While attending school overseas, Valmont got immersed in the music of the greats and built up a record collection which he shared with many of the Saint Lucian musicians and enjoyed listening to them play music from those very same albums.

Francois, a long time of his gave his endorsement of the project via a message read out at the event.

ESP’s ultimate objective is to ‘revolutionize’ the music industry in Saint Lucia as well as reaching out to artists from the wider region, and yet remain relevant to its motto of: Peace and Positivity, with an underlying theme for the promotion of conscious lyrics.

“There is quite a lot of work to be done towards the healing of our nation …and here at ESP our main aim and mission is to effect a great change , a positive change in our immediate society and country Saint Lucia and by extension the wider community and the world,” Empress Illa asserted at the recent media launch.

She added: “We would like to send out positive healing frequency waves through our music …and I feel that our talent and special skills was given to us and should be used to enhance the good in us and in others.”

Empress Illa said music from the artist should reflect such positivity, “and at ESP…everything that goes out from this production house will be positive vibrations and will be used for the good of our nation towards our human development.”

Speaking to the media, Empress Illa revealed that ESP has released some new music while working with artistes prior to the launch.

The singer/song writer says they will utilize this medium as a vehicle to nurture local talent, “and we want to reach out to the four corners of the globe…and we want to cover the earth with what we’re doing here, and with music to use it to do well.”

She noted that in addition to the recording sessions there will be a lot of collaborative efforts with the artistes to get their music out there, and “we welcome everyone, all artists, producers, engineers …because there is a lot more we can do together.”

With Lyttleton’s persistency and Empress Illa’s artistic skills they managed to make contact with key personnel in the music industry in a determined quest to accomplish their goal.

They got to refurbish a warehouse building, at Bisee, which is now fully equipped with an office, music studio and lounge/waiting area space included in the music production studio.

Lyttleton and Empress Illa expressed much passion and enthusiasm of their desire to bring about “positive change in our worldwide community. We are here to provide an avenue for expressing one’s creativity while inspiring and motivating others with music.”

ESP’s managing director Valmont explained it was a ‘team effort’ that work tirelessly and harmoniously to bring about this musical unit.

What was the motivating factor and drive that pushed Valmont and his team to want to accomplish this venture?

Valmont recalls that he began recording music from about 1962 and some 30 to 40 years later there are musicians still struggling to hone in their craft with little compensation for the work that they produce. He says that the annual ‘Jazz Festival’ has not produced greater dividends for local artistes and so “we need to concentrate on our people from ‘inside-out and not from outside-in’ …and so that’s my motivation. It’s not for wealth, or acquiring more material things but it’s taking our God given talents and sharing it with the world.”

The ESP launch brought out a gathering of some top local musicians that included the likes of Emerson Nurse, Monty Maxwell, Ricky Francois, Empress Illa, Adam Gilmour, Ras Booty and other veteran musicians such as ‘Charley’ and some young budding artists who provided riveting live performances in studio, and later took the session to an outside setting.

Valmont feels strongly that more needs to be done to record the music of local artistes for posterity, as well as, to infuse a level of professionalism in the art. He asserted: “Everybody has got a little computer at home doing something, but we need something richer than that.

“People are coming to Jamaica and going to Bob Marley’s studio …why can’t people come from wherever in the world and come right here to MYOHO Studios.”