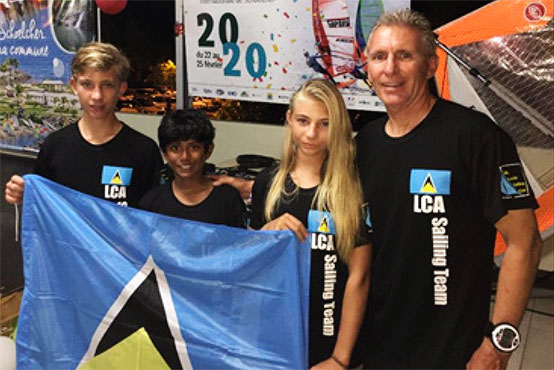 SAINT Lucia Yacht Club (SLYC) located in Reduit Beach has had a Youth Sailing Programme for many years. Many aspiring youth sailors have learned to sail through the guidance of experienced sailors. During the month of February amidst all the Independence celebrations which took place islandwide; the SLYC hosted a series of races on Sunday afternoons for the youth sailors.

The finalists of the series were awarded recently when the Commodore of SLYC, Peter Lang, named the youth sailors that would represent Saint Lucia at Schoelcher Sailing Week in Martinique.

During this presentation, Commodore Lang announced the transition from long time sailing coach Frederic Sweeney to Adonai Modeste. Modeste received his start in training through the SLYC programme and further went on most recently a member to participate in the ARC Youth Team that sailed in the Atlantic Rally for Cruisers (ARC Rally) 2019.

The junior team consisting of Sebastian Ambler, Brianna Batrick, and Brice Batrick were accompanied by Team Manager, David Batrick who provided the junior team with the experience to race with regional and international youth sailors.

Encouraged by their performance, “The team has done quite well and this event helps them prepare for the Saint Lucia Yacht Club Dinghy Championships which will be held in Rodney Bay May 29th -31st.”

Lang continued, “We are very happy with the results as the Team learned a lot about sailing when they competed and this year there were 10 sailors from France who made the Schoelcher 2020 event in Martinique even more memorable.”

Meanwhile, the Easter Race Series consisting of six race days with three races each for Optimist, Optimist Benjamin, and Laser 4.7 classes will set sail tomorrow (Sunday 8th March) and will continue every other Sunday. Each race day in the series will consist of three races.

On May 3rd, the last day of the racing series, there will be a prize giving ceremony held at the SLYC.