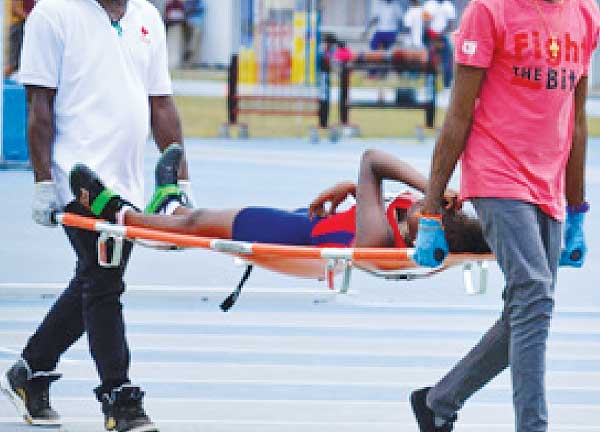 FORMER national football player in the early years (80s) Gilroy Hall is leaving no stone unturned in his effort for a comprehensive Sports Safety Programme (SSP), not only for sportsmen and sportswomen, but for all and sundry in Saint Lucia.

Affectionately known as ‘Ezi Hall’ in the show/events business (calypso), Hall is one of the most creative MCs on the island with his impromptu wit while on stage. Hall is presently spearheading the programme which is set to run for the first 3 – 5 years to incorporate students from primary and secondary school as well as higher learning institution such as the Sir Arthur Lewis Community College (SALCC) where he is the Physical Education teacher.

At a recently held launch at the Cultural Development Foundation (CDF) headquarters in Barnard Hill, Hall said, “The Safe Sports Programme is also expected to add special focus to the Elite Athlete Programme and Saint Lucia athletes right across the board”.

He said, this brings into focus the Saint Lucia Sports Academy located at the Gros Islet Secondary School and plans are a-foot to help nurture the student athletes into pursuing professional careers”.

During the media briefing, Hall said, “This initiative had been launched with the Minister for Youth Development and Sports Edmund Estaphane and members of the Physical Education Teachers Association (PETA).

He continued, “When Minister Estaphane came into office he immediately conducted an exercise where he met with as many of the stakeholders in sports as possible.”

In terms of the PETA, “We had a meeting with Minister Estaphane where we identified our priority areas as an organization and one such area of concern was the level of safety regarding sporting events,” he noted.

Hall said, “Following the meeting, the Minister requested that the PETA submit a proposal dealing with all of our concerns or suggestions. The Minister also decided that that particular aspect of sports development was important enough that we should really and truly get the campaign up and going.”

Hall added, “The Safe Sports campaign is commissioned by the Minister responsible for Youth Development and Sports and his expectations is that it will bear the kind of fruit that we all expect.”

According to the Events personality, “Discussion has been ongoing for four years (since 2016) and meetings were convened with Benson Emile, Permanent Secretary and Patrick Mathurin, the Director of Sports. Presentations were also made to the management of National Lotteries Authority (NLA).”

Hall said, “I unveiled plans to them and they felt that the initiative/ programme was something which was long overdue and felt that this SSP was one important element to sports development in Saint Lucia that has been missing for a very long time and without hesitation, they immediately jumped on board.”

I also made a presentation to NLA as the institution to fund the procurement of proper first aid kits that are specific to the activities and the occasion.”

He continued, “Following consultation with the Saint Lucia Red Cross Society and physiotherapists both local and overseas, they took into account the nature of the injuries that are most prevalent in Saint Lucia.”

There are several types of injuries that keep reoccurring on any given day on the field of play, according to Hall, who added: “The presentation of the first aid kits meets the criteria of the various sporting disciplines and after liaising with individuals here and abroad, the two respective kits, one a portable handbag carrier and a larger kit base, went through a vigorous screening process and to date everyone who had the opportunity to peruse including the media at the official launch have given it the thumbs up.

“The bottom line is, it all adds up into the safe campaign and the idea is to make all aspects of sports development safer.”

Hall concluded, “This is a campaign and not a workshop. This campaign is to change the mindsets of athletes and technical officials in taking more responsibility of their overall physical and mental well-being.”