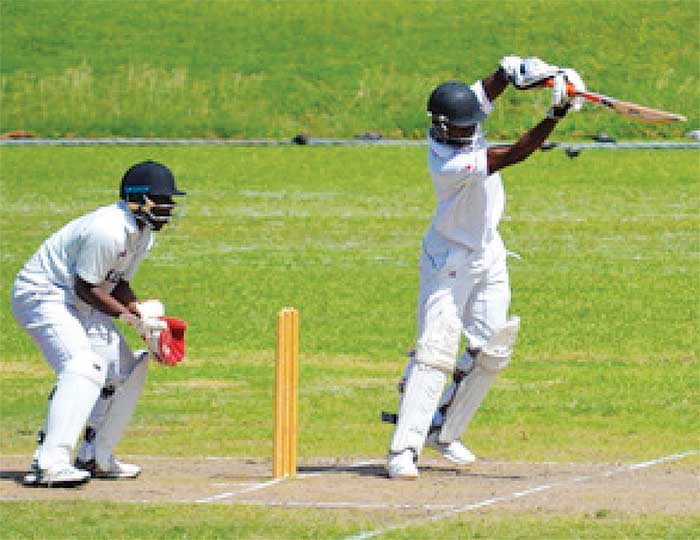 Some of the major highlights over the weekend were Windward Islands Volcanoes player Tarryck Gabriel completing a masterful innings of 209, Ackeem Auguste scoring his third consecutive century of the tournament 143, Alvinus Simon 131 not out, Kester Charlemagne 75 not out and 92, Malcolm Monrose 72, Mateo Boulogne 72, Tonius Simon 67, Johnson Charles 66, Chard Poilus 52, Zidane Arthur 50 not out. Tarryck Gabriel was also good with the ball picking up 5 for 9 versus Mabouya Valley and Hafeez Ali 5 for 44 versus Choiseul.

Earlier on South Castries won the toss and decided to bat in perfect conditions posting a very good total of 317 for 8 declared with half century contributions from Kester Charlemagne 75 not out, Malcolm Monrose 72, Tonius Simon 67 and Johnson Charles 66.

Central Castries batting through a tricky end of play period managed to close day one on 34 for 1 wicket.

Central Castries resuming their innings on day 2 (Sunday) put up a valiant effort in their quest to surpass the South Castries 1st Innings total fell agonizingly close by 34 runs. Posting a fighting total of 283 all out from 68.3 overs thanks largely to the continued brilliance of young Ackeem Auguste who for the 3rd consecutive game, mesmerized and exerted his dominance over his opponents with yet another exquisite century knock of 143.

South Castries in their 2nd Innings survived a late afternoon scare as Central Castries threatened to roll them over with an aggressive spell of fast bowling from national left arm fast bowler Dillan John (3 for 32) who ran through the defences of the South’s top order batsmen in his first 3 overs.

Tethering on 5 for 4 wickets and seemly staring down the jaws of defeat, South Castries gradually regained control thanks to a sterling 92 from National All-rounder Kester Charlemagne who showed great dexterity and composure in leading his team out of danger. The game ended up in a draw with South Castries gaining 1st Innings points.

Choiseul versus Vieux Fort North
At the Piaye playing field, Choiseul defeated Vieux Fort North (VFN) by 9 wickets, VFN won the toss and elected to bat and were bowled out for 120. Hafeez Ali top scored with 38, Jervon Isidore 21 and Al Prince 19.

Requiring 24 for victory, Choiseul scored 27 for 1; Jason Simon 15 and Junior Henry 12 not out

Gros Islet versus Mabouya Valley
At the Gros Islet playing field, Gros Islet led by an outstanding all round performance with both bat and ball by 2019 Windward Islands Volcanoes player Tarryck Gabriel completed a masterful innings and a 204 runs victory over Mabouya Valley.

Mabouya Valley batted first after winning the toss was dismissed for 156 in 37 overs with Chard Polius top scoring with 52, Wayad Hippolyte 23 and young Cleyanus Jules 19.

Gros Islet in reply, led by a brilliant double century from Tarryck Gabriel made a mammoth 461 for 8 declared in 69 overs.

Gabriel batting with absolute command made a magnificent 209 laced with 30 fours and 7 sixes.

Other major contributions came from Mateo Boulogne who made 72 with 11 fours and 1 six, Zidane Arthur in his debut match for the Gros Islet Senior team made 50 not out with 9 fours, Vernillius Gabriel 40, Lee Solomon 28 and Tyrel Chicot 12.

Mabouya Valley trailing Gros Islet by 305 runs were bowled out for 81 in 18.5 overs.

Only Chard Polius with 15 and Zachary Edmund 12 reached double figures.

Doing the damage for Gros Islet with the ball was Tarryck Gabriel with impressive figures of 5 for 9 in 4 overs, Simeon Gerson 3 for 9 in 4 overs and Kymani Sexius 2 for 14 in 5 overs.