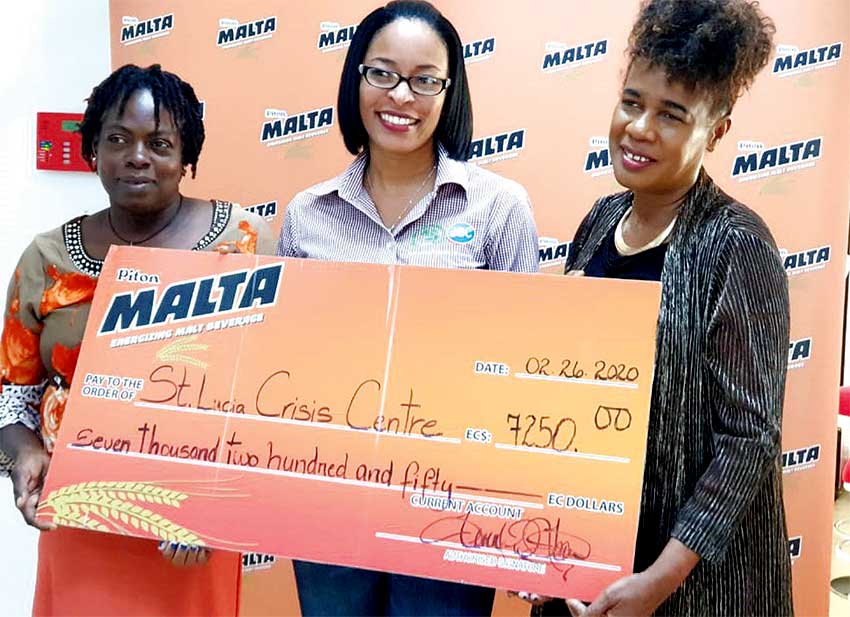 The Saint Lucia Crisis Centre provides individual one to one counselling and support services for victims of domestic violence, sexual assault and child abuse among many other social services, to the Saint Lucian public free of charge. However, according to its President, Lancia Isidore, the NGO is reliant solely on a small subvention from Government and the generosity of the private sector to be able to continue its work.

When the management of WLBL/DBC heard some of the challenges facing the non-profit organization, their corporate social responsibility mandate compelled them to assist. Several calls and meetings later the Piton Malta Nourishing Futures Campaign was launched to raise funds to support the invaluable social services that the center provides throughout the year. Whether shoppers were aware or not, for every Piton Malta purchased at a Massy Stores Supermarket, five cents was donated to the Saint Lucia Crisis Center. At the end of the promotion, the total monies raised came to $3625.00. WLBL/DBC decided to match that figure to bring the total donation amount to $7250.00

According to Brand Manager for Piton Malta, Mrs. Fern Wilson-Jean, “The Piton Malta brand is all about providing nourishment and care for families, something that the Saint Lucia Crisis Center has been doing for years. So, partnering with them and supporting their work, is really a no-brainer for us.”

At a small cheque presentation ceremony, held at WLBL’s Corporate Head Office last week, Managing Director of the Center, LanciaIsidore expressed how grateful she and her colleagues were for the generosity of WLBL/DBC.

Windward and Leeward Brewery Ltd and Du Boulay’s Bottling Company Ltd were very pleased to commit to its promise to the Saint Lucia Crisis Center as well as to have its Piton Malta brand associated with the type of organization that has a significant impact on the development of the nation’s human resource. The Saint Lucia Crisis Center is located on 07 Chausee Road, Castries and is open to anyone seeking shelter or counselling.