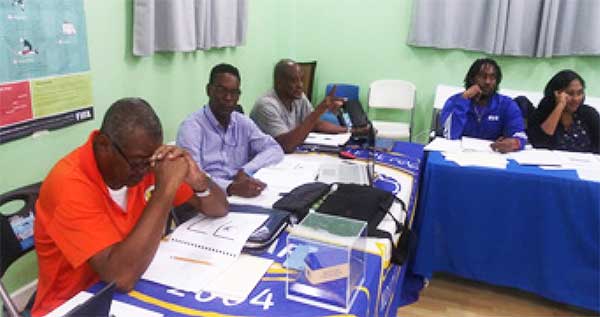 A total of 15 staff members benefitted from the activity which was facilitated by Francis Burnett, a Saint Lucia Trainer.

The workshop sought to improve on the skill set of the Association’s staff in their preparation of documents that were targeted at the various partners that impact football.

The workshop focused on the 7 Cs of Business Writing.

Complete – Provide all necessary information, and answer all questions asked or implied; Concrete – Give facts, accurate figures, statistics, details and examples and use precise active verbs; Courteous – Be polite, positive and keep audience in mind; Clarity – Avoid wordiness and vague language; use active rather than passive voice; Concise – Get straight to the point. State only relevant information and avoid repetition; Correct – Use good grammar, spelling, punctuation and format; Coherent – Information is logical, sequential and conversational.

Staff have indicated that the workshop had impacted them positively and that they are now better equipped in business writing.

The Association will continue with the series and will undertake the next Workshop for the Executive Committee Members and National Team Managers on Friday 27th and Saturday 28th March 2020.

This workshop will be held at the Conference Room of the SLFA in La Clery Castries.

Another Workshop under consideration by the SLFA is Customer Relations

Meanwhile, on the field of play, two matches were played in the SLFA 1st Division Football Championship at the Phillip Marcellin Grounds (PMG) in Vieux Fort on Wednesday 11th March 2020.

In the first game played, and despite Big Players mounting a spirited come back in the second half, they still went down to Ti Rocher 3 – 2.

Ti Rocher stomped into the lead with a goal by Andre Joseph in the 7th minute of play. This lead was further consolidated with a second goal by Teran John in the 18th minute.

Six minutes later Joseph registered his second goal to give his team a 3 – 0 cushion at the end of the first half.

On the resumption Big Players came into their own and immediately reduced the deficit with a goal by Jordan St. Ange in the 46th minute of play.

This goal spurred on the lads from Marchand and in the 82nd minute of play prolific goal scorer Lincoln Phillip made it 3 – 2 with a well struck penalty. No further goals were scored as Ti Rocher sealed a hard fought three points.

In the second encounter, and following a goalless first half Knights FC defeated VSADC 1 – 0 with a strike by Kingsley Henry in the 53rd minute of play.