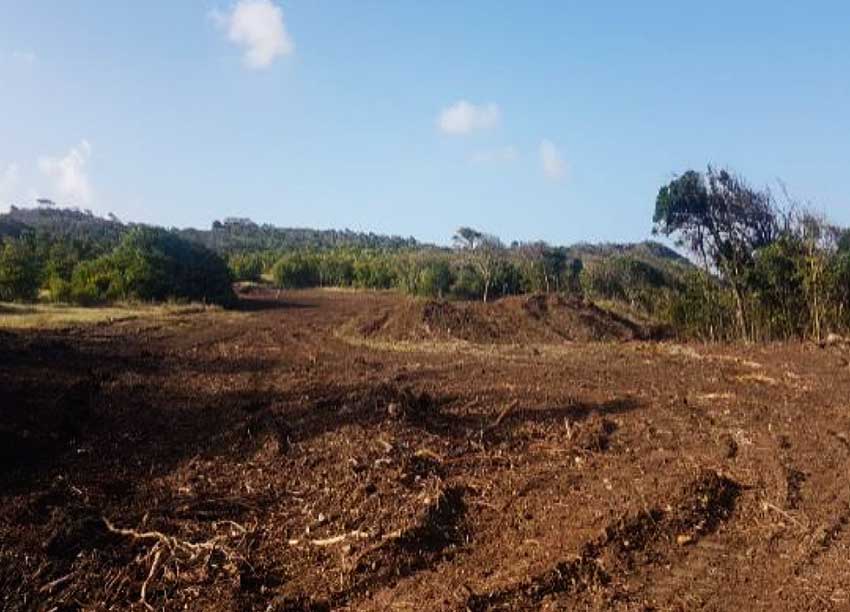 The parties to this press release stand together in support of genuine sustainable development for the benefit of the people of Saint Lucia. Over the past seven months, we have sought individually and collectively to engage in productive negotiations with both the developers of the Cabot Saint Lucia (Canadian-based) project and the various public agencies responsible for observing due process to ensure the safeguarding of citizens’ rights and the natural and cultural heritage of Saint Lucians. All of our efforts to date have been frustrated and we are left with no option but to speak out publicly, as we witness the ongoing massive clearance of large tracts of land without the necessary safeguards or preparations, jeopardising important archaeological and natural heritage within the Cabot Saint Lucia site and the adjoining Queen’s Chain (examples in Figure 1 and 2).

Since learning of this development in mid-2019 we have, singly and collectively, sought dialogue to state our concerns and explore options to address them.  Initial meetings were held separately between our organisations and the developer during which we presented our concerns frankly and openly. At these meetings, the developer spoke to their observance of international best practise in their approach to development across the globe and made several promises to continue dialogue in an effort to find ways to address our concerns.  The developer has so far not lived up to these promises and our efforts to re-engage have been ignored.  Similarly, our efforts to obtain information from the Development Control Authority (DCA) on what has been approved, and on any conditions imposed by the DCA to ensure sustainable development have met with no meaningful response.

In the meantime, many acres of land have been cleared and, as we had advised was likely to happen, the developer’s bulldozers have uncovered artifacts.  Invest Saint Lucia recently reached out to us for advice on how to deal with these artifacts, but they also seem unable to convene an urgent meeting amongst the developer, the DCA and ourselves, even as land clearing by the developer continues apace and in contravention of international Conventions and best practice.

Our concerns are many and are triggered by, and responsive to, the unwillingness of the developer and the authorities to engage in dialogue and undertake responsible development and development control practices. These include:

Each of these is grave enough to be of concern to every citizen. The Cabot Saint Lucia developer is pursuing a plan that will prevent public access to beaches for recreation or fishing, contrary to national law and disturbingly, facilitated by the DCA and our decision makers.  We must juxtapose this against the practice of hotels to discourage public access to other beaches across Saint Lucia, whether this is done aggressively or by subtle means. However, the ongoing Cabot development is the first time that we have seen the explicit approval by national authorities of a development design that deliberately excludes and precludes public access. This infringement should be a worry for every Saint Lucian. If our public allows this, those who are appointed or elected to protect citizens’ rights may be emboldened to continue to deliberately violate these rights at the pleasure of prospective developers.   Why do we accept the notion that a tourist must be given exclusive access to our heritage sites and public landscapes? Why do so many of us believe that we are not good enough to share in the enjoyment of public spaces with our visitors? Why do we not see ourselves as enhancing rather than diminishing the visitor experience through our interactions with them? Why do we persist in pursuing visitors who do not want to interact with us as part of their visitor experience?

We reiterate that we do not object to national development that is sustainable and provides opportunities to improve the quality of life and earning potential of our people, but we have serious concerns about the irregularities with this particular project’s development approval process and related conditions, the widespread land clearing which is proceeding without safeguards, the ongoing destruction of heritage assets and plans to prevent access to the Queen’s Chain and beaches.

Furthermore, we are very perturbed by the unwillingness of the developer and the DCA to respond to our many requests for dialogue to resolve the important issues we have raised. Our efforts to engage with the authorities and the Cabot Saint Lucia developer to ensure that this development is undertaken responsibly, sustainably, and is in a way that protects natural, social, cultural, archaeological and recreational assets that belong to the people of Saint Lucia, have been frustrated time and again. We have exhausted our options to get to the negotiation table.

As national entities we have a responsibility to represent national interests, but our voices are small. We cannot do it alone. These infractions should mobilize all Saint Lucians to action.   Public support must rally, and call out developers and the authorities who implement or condone unsustainable development approaches that will result in  irreparable harm to important national heritage, loss of access to beaches that is the right of every national of this country, and loss of our children’s future earning potential from public spaces. We call for development works to cease until a clear plan to develop this site responsibly is documented and reviewed by the referral agencies, and for the government to institute an oversight mechanism involving key stakeholders including the National Trust, the Archaeological and Historical Society, Invest Saint Lucia and DCA to ensure that the developer follows an acceptable development plan.

Today we embark on this campaign to raise public awareness of what is happening on the Cabot Saint Lucia development site, and what this means to us as a people. The inappropriate and unsustainable approach taken so far in this development means that important heritage of value to the people and country may have already been irretrievably lost.  We are a small country with limited resources that are an important part of what define us as uniquely Saint Lucian. We need to appreciate and conserve these wonderful and fragile attributes that underpin our ability to develop sustainably.  Let us never forget that Saint Lucia does not exist simply for visitors to enjoy. She is ours to protect for the preservation of our Saint Lucian identity, and the enjoyment, recreation and livelihoods of our people for generations to come. She is ours to share in perpetuity with the visitors who come to our shores. If we do not take care of her, who will?