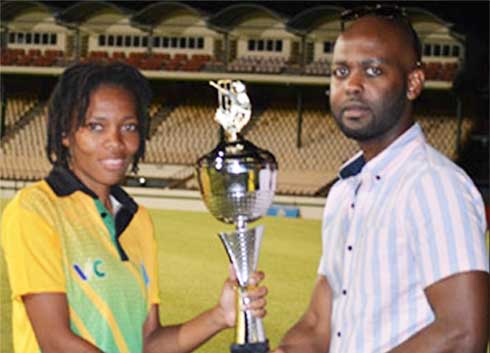 TEAM Saint Lucia had to work hard up until the final over of the Windward Islands Women’s T20 Cricket Tournament final played at the Daren Sammy Cricket Ground last Thursday to secure victory against Saint Vincent and the Grenadines.

Player of the Match Qiana Joseph hit 6 fours and 1 six, as she got to 62 from 62 deliveries.

Needing 116 for victory, Saint Vincent needed two runs from the final delivery to secure victory. In the end, they got to 114 in their allotted 20 overs.

For SVG, Juliana Nero top scored with 50 from 65 deliveries which included 5 fours. Stacy Ann Adams scored 21, Cordel Jack 14 and EdelynTurtin 9 (not out).

For the third-place playoff Grenada defeated Dominica by 2 wickets. Scores in the match: Dominica 101 for 4 in their allotted 20 overs. Player of the Match was Pearl Etienne who scored 37 not out, while Gem Eloi scored 27 and RosiliaRegiste 17 (not out); these were the main contributors with the bat.

The most successful bowler for Grenada Aria Fortune took 3 for 19.

Grenada reached their target for the loss of 8 wickets; Shantan Charles (22), Carena Noel (16), Racket Williams (14 not out), and Aria Fortune (12) were the main contributors.

Final results in the 50 Over Tournament; Saint Vincent and the Grenadines successfully defended their title with Saint Lucia 2nd, Dominca 3rd and Grenada 4th.

Meanwhile, Ashlene Edward captain of Team Saint Lucia has been named vice captain of the Windward Islands Women’s Cricket Team. The team was announced following the completion of the Windward Islands Women’s T20 Competition. After finishing first in the T20s and second in the 50 over format of the competition, five Saint Lucians were selected on the sub regional team.

Saint Lucia’s leading scorer in the 50 over competition Malika Edward got her first call to regional duties. Fourteen-year-old Zaida James who batted well, bowled well and certainly showed her level of maturity throughout both formats of the game was also named for the Under 19 team as vice-captain with the hopes of breaking into the West Indies team scheduled to participate in the ICC Under 19 Women’s World Cup next year.

Also being recalled to the Windward Islands Senior Team is fast bowler Yasmine St Ange. On the reserve side for the sub regional team is Saint Lucia’s Nerissa Crafton.