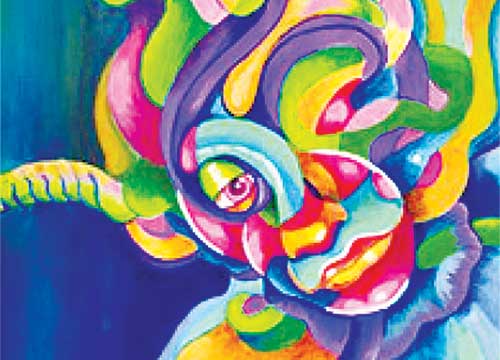 Peepal Tree describes Lee’s new work, as “..the most vigorous, demotic and experimental of John Robert Lee’s collections. There are new explorations of poetic forms such as the glosa, homages to the poetry of writers from Dionne Brand to Francis Thompson, the literary equivalent of the ekphrastic poems that have been appearing in his recent work. Pierrot is probably the most intimate of Lee’s collections, more of the man in all his guises appears here, a confessional voice lightened by self-irony and humour.”

The cover art is by Saint Lucian artist Shallon Fadlien, resident in Canada.

Derek Walcott, Nobel laureate, had said in 1993 of Lee, “Robert Lee has been a scrupulous poet, that’s the biggest virtue that he has, and it’s not a common virtue in poets, to be scrupulous and modest in the best sense, not to over-extend the range of the truth of his emotions, not to go for the grandiose. He is a Christian poet obviously. You don’t get in the poetry anything that is, in a sense, preachy or self-advertising in terms of its morality. He is a fine poet.” In the new Pierrot, Lee pays homage to the late poet laureate with a poem titled White cedar.

Peepal Tree Press, one of the most important of small independent presses in the UK, publishes a number of Saint Lucian writers including the late Garth St. Omer, Earl Long (both novelists) and poets Kendel Hippolyte, Jane King, Vladimir Lucien and Adrian Augier. Saint Lucian Antonia Macdonald has edited The Fiction of Garth St. Omer: a Casebook (2018) for Peepal. The very prestigious T.S. Eliot Prize for poetry (won by Derek Walcott in 2011) was awarded in January to Trinidadian/British poet Roger Robinson for his A Portable Paradise, published by Peepal Tree.

John Robert Lee has been a prolific writer and editor, with several local publications to his credit. His poems, stories and reviews are published in many regional and international journals and anthologies. Last year Papillote Press (London & Dominica) published his Saint Lucian writers and writing: an author index, a bibliography of Saint Lucian writing from the 19th century to 2019. The Index was dedicated to the 40th anniversary of Saint Lucia’s independence in 2019. He has been a teacher, librarian, radio and television broadcaster and is a teaching elder with his local Baptist church. He recently retired from the Msgr Patrick Anthony Folk Research Centre where he served for several years as librarian, publications editor, education and media officer.

Lee’s new Pierrot will be available at local bookshops and a book launch is being planned. This and other of Lee’s publications, and books by Saint Lucian and Caribbean writers can be ordered directly from the Peepal Tree Press (www.peepaltreepress.com).