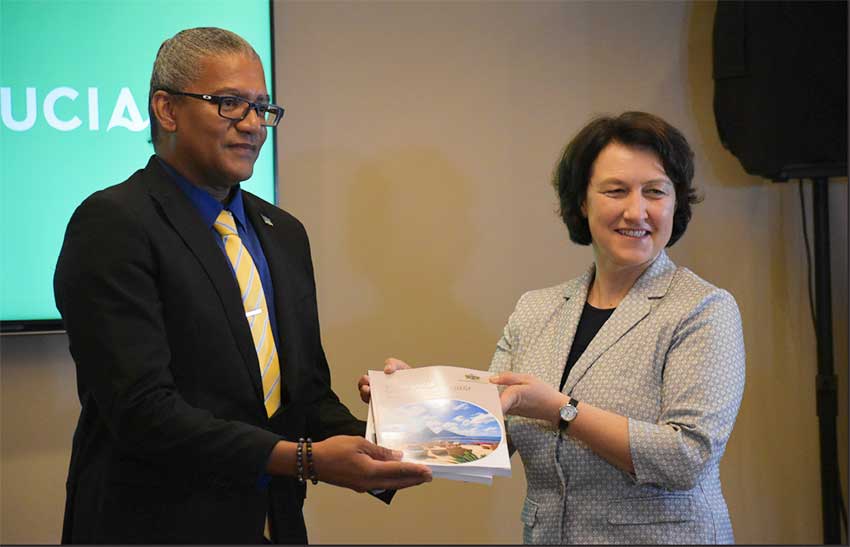 EXPORT Saint Lucia, last Tuesday, launched the 2020-2024 National Export Strategy (NES) at Sandals La Toc. NES was developed through the methodology and technical assistance of the International Trade Centre (ITC) for the purpose of elevating Saint Lucia’s export sector. It was also developed within the framework of the ITC Trade Development Strategy programme. The ITC is the joint agency of the World Trade Organisation and the United Nations.

The previous NES was completed for the period 2005-2009 and focused on the capacity of the country to produce and to offer its export partners the commodities and services which were in demand at the time. The Government of Saint Lucia decided it was important to implement a new NES which reflected the country’s on-going economic realities and potential for export growth. The vision of this current strategy is: “Uniquely Saint Lucian with global appeal.”

Bradley Felix, Minister for Commerce, Industry, Investment, Enterprise Development and Consumer Affairs, said the strategy was “The marriage of the policy of the government, the wishes of the people, and was expressed through numerous consultations.” Felix said that ITC had been a loyal partner of Export Saint Lucia and the Government of Saint Lucia for many years.

Felix said, “The National Export Council (NEC), whose primary function is to guide Export Saint Lucia along the Export Council-path as directed by the Government, will keenly follow the implementation to ensure that in every stage the policy is adhered to.” To that end, the Minister said that Export Saint Lucia had selected a Lead Coordinator with a well-developed work implementation plan. “There will be challenges, but I have every confidence that they will be surmountable as the foundation of support is strong from the Government, NEC, and Export Saint Lucia.”

He continued, “The NES is a detailed roadmap for faster export growth and acknowledges that things need to be done differently to ensure a higher contribution from export and trade to our Gross Domestic Product (GDP). It will champion the traditional sectors while incorporating innovation to ensure export sectors are less vulnerable to market variations.” He said the NES provided a unique window of opportunity for Saint Lucia to modernize and start a new cycle of economic prosperity. He concluded, “We look forward with great alacrity and expectation to the implementation of NES; the expected and much desired growth of Saint Lucia’s export portfolio and ultimately its positive impact on our country’s economy.”

ITC Director and Chief Economist, Marion Jansen, was present at the launch. She intimated, “If you are going to have a global appeal and survive in a global competitive world, your companies, including the small and medium size ones, have to be competitive.” She proclaimed that ITC had the expertise for stimulating sustainable trade, and affirmed that the NES contained all the elements that would make that happen in Saint Lucia.

The sectors covered by the NES were reported to be Creative Industries, Tourism, Food and Beverages, Renewable Energy, and Information and Communication Technology (ICT). According to Jansen, the NES identifies the issues and constraints for the development of each sector. It contains three strategic objectives which are to strengthen the competitiveness of Saint Lucia’s business environment; to expand the national productive capacity and diversify the export basket; and to ensure increased trade is environmentally friendly.

Jansen said one of the biggest challenges for small economies is the fact that they possess less land, less people and fewer resources. “Yet, you have to diversify in order to reduce your vulnerability.” She stated further, “The document [NES] we produced is a nice read; it is a good product, but it will only help you to realize your vision if it is implemented.”

Sunita Daniel, CEO of Export Saint Lucia, extending thanks to ITC for their technical and financial support towards the development of the NES. She said, “Export Saint Lucia’s mandate has been tweaked here and there based on the policy and direction of the day, but the one thing that has never changed is the dedication of this agency towards the growth and development of Saint Lucia’s business community and to our exporters.” She said the NES will support the agency’s dedication. She stated, “The NES is a roadmap; a document which has examined our current position and the trade climate around us. I cannot over-emphasize how meticulous the development process was”

She said the sectors focused on by the NES were inline with the production capabilities and trending demand of Export Saint Lucia. She continued, “I can ensure you that at Export Saint Lucia, we have made all necessary internal adjustments to ensure the successful implementation of this strategy. We are committed to you, our client and the success of all business enterprises in Saint Lucia, both big and small.”