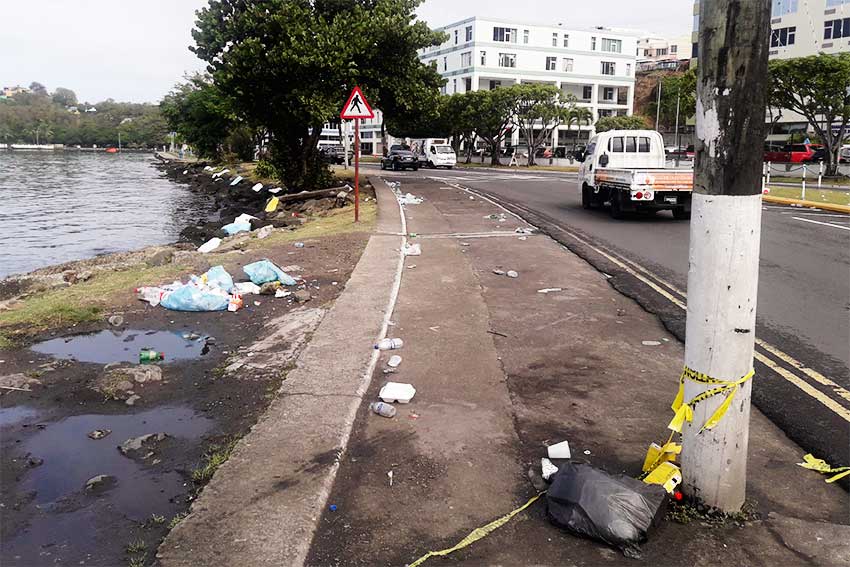 THE Castries Constituency Council (CCC) was hit with industrial action yesterday as employees laid down their tools in protest.

As a result, debris littered the streets of Castries early Monday morning, from celebrations held in honour of Saint Lucia’s 41st Anniversary of Independence over the past weekend.

The Castries Waterfront was especially affected by the garbage left in the streets from the night before.

Wilfred Pierre, Chief Executive Officer (CEO) of the CCC, indicated that reasons for the industrial action taken by workers were unknown to him. The CEO responded to speculations that the protest was related to the council’s refusal to grant a 6 % salary increase to workers. He said that although matters regarding the increase might have been the issue for workers, discussions on the subject were ongoing. He stated further, “I know they’ve been looking for another 6 % but we have not concluded that as yet.”

Pierre stated, “The workers always come to us when they have issues and we try our best to see how best we can assist them.”

Pierre said that he also heard the industrial action might have been related to the position of a worker which was made redundant. He remarked, “We really need to sit down with the union and have a discussion.”

He said that although workers showed up for work that morning, they refused to perform their duties. He said that workers were gathered at the location of the council awaiting a meeting with their union.

“We are trying our best to clean the streets because it’s an essential service and we cannot allow it to be neglected like that,” Pierre said.

According to Pierre workers from other sections of the CCC were deployed to assist with the clean-up exercise. He reiterated, “It’s an essential service and you cannot have garbage in the place like that. You cannot have your city, especially the main waterfront, looking like that.”