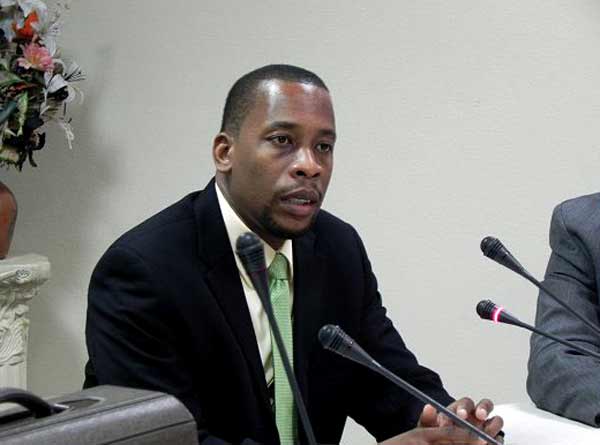 With a population of 644,600, a per capita income of EC$32,900, a Gross domestic Product of EC$21.2 billion (2019 estimate), and a projected growth rate of 3.3 percent for this year, which would be constrained by high debt, the ECCU economy would need faster economic progress as this necessitates the acceleration of structural reforms.

So said the ECCB Governor Timothy Antoine and its economist for Saint Lucia, Leon Bullen at a press conference last week.

Stating that the maintenance of a strong and stable Eastern Caribbean Dollar is one of the ECCB’s main goals, the duo indicated that this is at the core of the economic transformation of the ECCU. Other goals are to ensure a strong, diversified and resilient financial sector, for the ECCB to be the advisor of choice to governments in the ECCU in pursuit of fiscal and debt sustainability and actively promote the economic development of its member countries.

Economist Bullen said that the banking sector in the ECCU is stable with an improvement in its capital position and that the Capital Adequacy Ratio for Saint Lucia, which stands at 21.1 percent, up from 19.1 percent the year prior, is considerable higher than the minimum benchmark which is at eight percent. He said the Capital Adequacy Ratio improved both at the Saint Lucia level and at the ECCU level.

“The rate of decline has fallen in the last year to one percent from 1.9 percent the year before. We take solace in that and is hoping that this trend continues and trend upwards and become positive but as of last year private sector growth was still negative from the commercial banks,” Bullen said.

Contrasting that with credit growth in credit unions Buller said that in 2018 credit grew by 6.3 percent and has been growing since 2014 and continues to grow falling slightly in 2018.

“Credit unions have become the engine of private sector credit in saint Lucia and throughout the ECCU,” Buller said.

On the subject of non-performing loans within the banking and credit union sectors in both Saint Lucia and the ECCU, Buller said they were above the ECCB target or benchmark of five percent. As of September 2019, non-performing loans in Saint Lucia stood at 8.6 percent down from 10 percent the year prior. There was also a similar drop at the ECCU level.

“This is a positive development and we are confident that we will continue to get closer to the five percent benchmark that we have set,” Bullen said.

With respect to credit unions the ratio stood at 7.6 percent at the end of 2018, something Buller said was still reasonably acceptable however the ECCB will continue to monitor this very closely because of the importance credit unions now play in the economy.

Some key action points for the bank is an enhanced, risk-based supervisory framework accompanied by new prudential standards; Strengthening of the financial sector with: Eastern Caribbean Asset Management Corporation; creating a Credit Bureau; having insurance for deposits and support shared services within the indigenous banking sector.

Bullen provided a brief update of de-risking saying that for the period 2017-2019, there were no losses of correspondent banking relationships in Saint Lucia. However, in the ECCU, some relationships were terminated, while new ones were created at increased cost and enhanced due diligence with resultant delays.

The ECCB will be continuing with the implementation of its four-pillar approach to de-risking which are advocacy with correspondent banks and US authorities, registration on Swift KYC Registry by all indigenous banks, assumption of Anti-Money Laundering/Combating the Financing of Terrorism (AML/CFT) supervision for all banks by ECCB and promoting consolidation among ECCU indigenous banks.

“Saint Lucia has done well to maintain all of its correspondent bank relationships, not every country has feared as well. However, the ECCB continues with its implementation of its four-pillar approach to de=risking, Bullen said.

In respect to debt to GDP, Saint Lucia it seems appears to be on course to attain the 60 percent debt to GDP target by 2030. Further, growth for the ECCU remains steady but for Saint Lucia it is expected to accelerate in 2020.

Key action points for the ECCB is the enacting of fiscal resilience legislation, adopting a regional approach to standard setting and pricing of Citizenship by Investment Programme and using inflows for productive sectors, resilience building and debt reduction. The ECCB would also like to see embedded disaster-linked clauses in new loan contracts.

Data received from the Central Statistics Department of the Government of Saint Lucia puts the unemployment rate at 20.2 percent (2018) with a consistent downward trend from 2014 – 2018. At the third quarter of 2019 the country’s unemployment stood at 17.5 percent with youth unemployment at 34.7 percent. Key action points for the ECCB to improve the unemployment situation in saint Lucia would be to revolutionise the education system to develop skills for the 21st century, foster more inclusive growth (jobs) and accelerate structural reforms including legislative reforms.

As the bank pushes towards the digital transformation of the ECCU some of its planned initiatives includes its Digital Currency Pilot Programme, its Digital Transformation Project with the World Bank, the development of legal and regulatory framework for virtual assets, financial literacy and forging strong partnerships with financial regulators, ECTEL and the private sector.