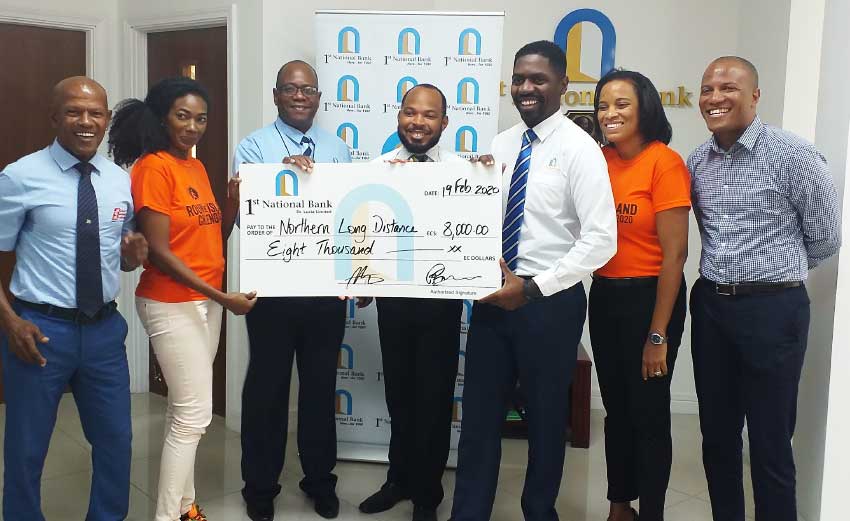 1st NATIONAL Bank has accepted the “Round the Island Challenge Independence Walk” as a partner with the Northern Long-Distance Walking Group founded in the early 1990s by John and Costello Michel. Soon enough, the rest of the Michel brothers, their spouses, other family members and friends joined the group as most of them were avid walkers.

In December 2012 Gregory Philgence a resident of Babonneau, presented a challenge to Mr. John Michel and the group, to walk around the island. Known to be one who never refuses a challenge, the “Round the Island Challenge Independence Walk” was born in 2013.

In cementing the sponsorship-partnership agreement, 1st National Bank’s Corporate Secretary and walking enthusiast; Mr. Henri-Jacques Mangal had this to say:” this event is one of endurance, determination, perseverance and stamina. These attributes fit in seamlessly and uniquely with 1st National Bank, an indigenous Bank which has stood the test of time amidst tremendous global changes and challenges.” The Corporate Secretary also indicated that the Bank considers the event an opportunity to send the message of a healthy lifestyle throughout the many communities around St. Lucia. Mr. Mangal went on to recognize the participants and how integral they are to the success of the event.

Upon receipt of the sponsorship cheque from the Bank’s Marketing Representative Mr. Michael Casimir, Ms. Tessa Phillips of The Northern Long-Distance Walking Group expressed her gratitude for the Bank’s continued support and indicated that the numbers continue to increase year on year and this year is expected to reach 500 based on the registration numbers. Ms. Phillips echoed the sentiment expressed earlier by Mr. Mangal and encouraged all Saint Lucians to include walking as part of their daily routine and make it a lifestyle habit.

The Round the Island Challenge Independence Walk commences at 6:00p.m. from Cul-de-sac on Saturday 22nd February 2020. “Now is the time, let’s do this together.”