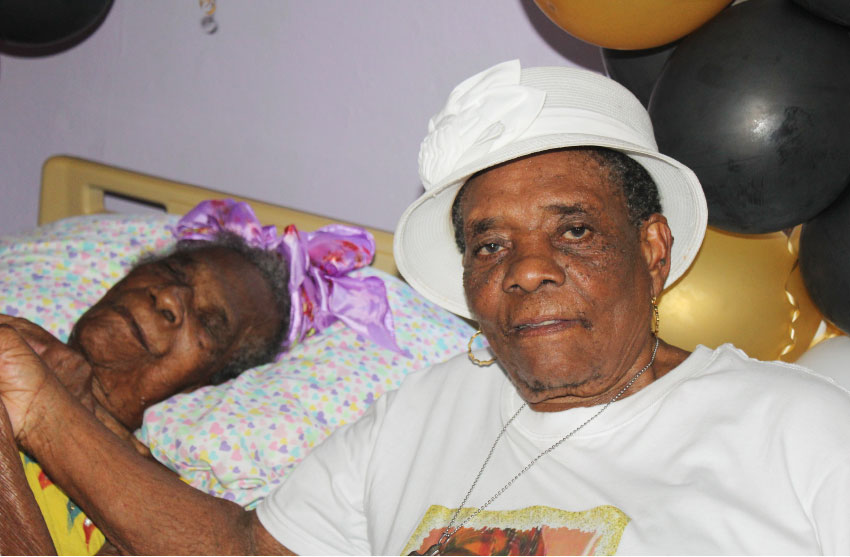 OVER the years many reasons have been given as to why people live to be one hundred years old and beyond. Some countries have been known to have citizens who perennially reach that record producing milestone, and Japan comes to mind.

Here in the Caribbean, persons reaching one hundred years have been aplenty with Saint Lucia being one of those countries that continually produces them.

Last Sunday another Saint Lucian reached that milestone. Angela Williams lit up the community of Old Belair when dawn broke on that day announcing her 100th birthday. And what a day that was!

And celebrated they did!

But first God had to be given the glory and so a church service was held at Williams’ home, officiated by Father Kenneth because Williams could not make it to church; she being bedridden, a condition she has been in for “quite some time” according to her great granddaughter, Tyra Francis.

Then came the congratulations as family members trooped in one by one, sometimes in groups to kiss her, hold her hand, speak gentle words to her and pose with her for photographs.

However, while the records showed that Williams was born on 5 January 1920, the talk that day was that she was older. Stories that suggested she was older begun to circulate even to the point that the record of her birth may have been inaccurate.

But whatever the case may have been, everyone recognized the milestone achievement, with one of her granddaughters, Cheryl Francis attributing Williams’ longevity to the foods she ate during her childhood and early adulthood and the strength she acquired working in two industries that were the backbone of the Saint Lucian economy at the time – the sugar industry, where Williams was a worker in the cane fields and the banana industry where she was also a worker in the banana fields.

Although she lived all her life at Old Belair, Williams maintains a unique feature that still astounds those around her – she prays in Latin, wholeheartedly and passionately, to a God that has blessed and kept her over the years.

Williams has two living siblings (sisters), both of whom reside in Saint Lucia.