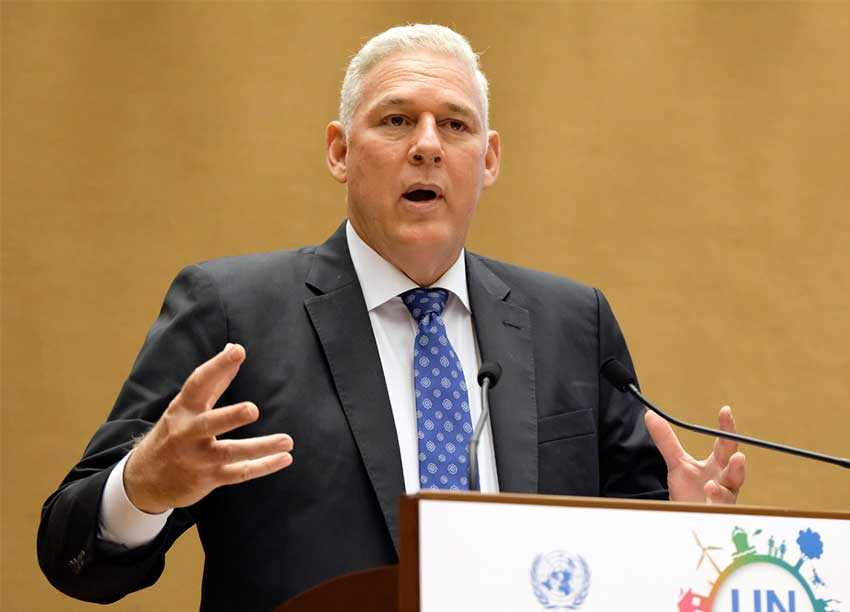 THE United Workers Party (UWP) is pressing on with some notable achievements and the launching of a multi-million dollar package of public and private sector investment projects that promises to boost the economy well into the future.

Over the last five decades St Lucians have grown to expect the country to progress and prosper whenever the UWP is holding the reins of government, and this time is no exception. The signs are there for all to see that Prime Minister Allen Chastanet’s team is beginning to turn the country around.

The most recent International Monetary Fund assessment on St Lucia, undertaken just last month, described St Lucia’s near-term growth prospects as “favourable”. I said that “robust” tourism inflows had sustained economic activity despite delays in public infrastructure investment, adding that the commencement of these large projects by year-end was expected to substantially boost growth in 2020-22.

The IMF was referring to the US$175 million upgrading of the Hewanorra International Airport which has just kicked off in Vieux Fort, where the 90-bed St Jude hospital is also under construction. More than US$100 million is being spent on the island’s roads and the government has signed a Memorandum of Understanding with Carnival Corporation and Royal Caribbean Cruises to form a joint venture to design, construct and operate a new cruise port in the south of the island.

According to the IMF, activity in St Lucia picked up in 2019 with record growth in tourism activities more than offsetting a contraction in construction. Preliminary information also showed a further improvement in the current account with unemployment rates being decreased to 18 percent, as compared to 25 percent at the departure of the previous administration.

Since 2016, the Allen Chastanet administration has delivered on one of the core promises of their election campaign, the so called “5 to Stay Alive”, aimed at easing the financial burden on the entire population by reducing VAT from 15 percent to 12.5 percent, giving an amnesty on outstanding hospital bills and doubling the amount spent on school feeding and school transportation. They also granted a three year amnesty on personal property taxes and reduced the license fees on vehicles. From January next year, when income tax reforms announced in the most recent budget take effect, thousands of St Lucians, including pensioners, will find themselves paying less or no income tax.

Add that to the three successive years of economic growth under Chastanet’s government, the reduction in unemployment and the debt to GDP ratio and the return of major investment to the country, both public and private sector, and one cannot help but conclude that things are changing for the better. The construction of the Hewanorra International Airport which has now started, the planned regeneration of Castries, including the market project, the roads, ports and water projects, the private sector hotels, when combined represent a formidable package that is bound to push the economy further and create hundreds of additional jobs.

Then there is the renewed interest in agriculture, including the increase in banana production and record-breaking arrivals in tourism to be added to the mix.

All around the island, projects are being undertaken in education, agriculture, tourism, community development and social services that are improving the lives of ordinary people. Among them the building and refurbishing of schools (Choiseul, Dennery, SALCC etc.), the creation of playing fields (Canaries, Fond St Jacques, Balata, Fond Assau, La Guerre etc.) and community centres, housing, roads and water. Every year the Prime Minister’s own fund raiser, a gala ball, generates thousands of dollars to help community and social causes. This year alone the project raised nearly half a million dollars for 15 needy cases.

Interestingly, even with these positive developments, neither Prime Minister Chastanet nor any of his Ministers have been out there bragging or beating their chests. Said Mr Chastanet recently: “Whilst we are in no way satisfied with where we currently are, we can proudly acknowledge that St Lucia is in a much better position than it was three years ago. Unemployment is at its lowest in the last eight years. The debt to GDP (gross domestic product) ratio is declining. We have recorded three years of record tourism arrivals and we recorded a primary surplus for the first time in many, many years.”

One now fully understands the reason for Labour’s unending crusade against Allen Chastanet that comprises outright lies and attempts to belittle, ridicule and tarnish his character and good name. It was the exact same strategy Labour used to harass the late Sir John Compton for more than 40 years, ending only at his death when for the very first time; the party finally admitted that Sir John was an outstanding leader. Most of us had long recognized the man who became the architect of the modern St Lucia, who took this country from nothing to the showpiece of the Eastern Caribbean and was acclaimed for his passion for work, his leadership and his great vision.

In my opinion, we have had better government under Chastanet than we had under Labour. A tour of the country will reveal that there is some form of developmental activity taking place in nearly every community, bringing facilities and a better standard of living to all our people.

The developmental agenda has been the hallmark of UWP administrations over the years and has brought progress and change to St Lucia. There is no doubt that Allen Chastanet is putting this country on the right path once again and this must be causing Labour many sleepless nights!