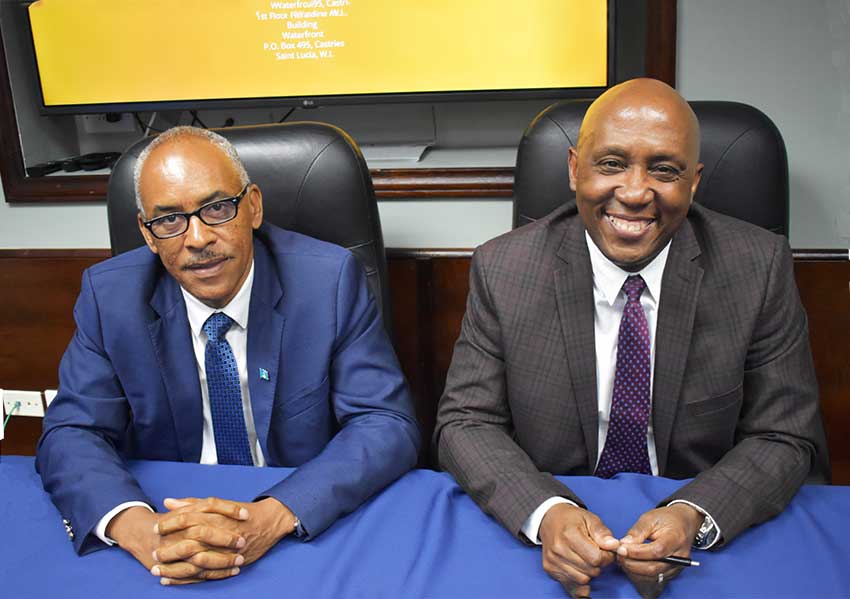 INVEST Saint Lucia says that it is very proud of its achievements for the past year. Roderick Cherry, CEO of Invest Saint Lucia, at a press conference on Thursday remarked, “We are even more excited about what is to come for 2020. So today we will be giving you a brief review of 2019 and we will let you know some of our plans for 2020.”

He described the creation of the Royal Saint Lucia Turf Club as a success story. He said, “It was a proud moment for us at Invest Saint Lucia when we saw the first race. This has ushered-in a new project to Saint Lucia, and a different type of visitor and investor would be expected.” He mentioned the Caribbean Quality Meats Project, which was currently ongoing and close to completion.

The CEO said Invest Saint Lucia had received international recognition when they were nominated in 2019 for the Directorship of the World Association of Investment Promotion Agencies to represent Latin America and the Caribbean on the Steering Committee, though Saint Lucia lost on the final round of voting to Costa Rica. Irrespective of the loss, Cherry remarked, “This type of recognition is very significant, and we are very proud of that.”

According to Cherry, the strategic plan of Invest Saint Lucia, which was revised late in 2018, was reported to have taken effect in 2019. Cherry said that one of the tenants of the plan included a new approach to marketing which focused on specific trade shows, local businesses, the Diaspora and the expansion of existing investors. He also announced that the focal point of the strategic plan was to increase land ownership by Saint Lucians.

Speaking on the Land Rationalisation Projects which were lined up by Invest Saint Lucia, Cherry stated, “Invest Saint Lucia owns quite a bit of land which has some illegal occupiers. We have taken the decision to put in quite a bit of money to bring some order and to give people ownership of the land.” The Land Rationalisation Projects touch places like Pierrot, Lumiere, La Pelle Despinoze, Grande Ravine, La Ressource, Coolie Town, La Retraite, Hope Estate and Morne View.

Regarding the Land Development Projects in Beauchamp, Micoud and Bois Jolie, Dennery, the CEO reported that the 25 lots at Bois Jolie were nearly sold out whereas approximately 75% of lots have been sold in Beauchamp.

Cherry said Invest Saint Lucia was focused on promoting key sectors, which included Tourism, Business Process Outsourcing and Manufacturing. He announced that the official signing for the ItelBPO investment was expected to take place next week. Invest Saint Lucia is in the process of retrofitting a factory shell in the south of the island for the use of ItelBPO, a Jamaican business outsourcing company, and Cherry noted that the official opening of ItelBPO was expected to take place this coming April. The company will offer an estimated total of 500 jobs by the end of 2020.

Among the ongoing projects for Saint Lucia was the Anse de Sables, which is a 117-acre, mixed-use property which is earmarked as a catalyst for development in the south of the island. In that respect, Cherry remarked, “We are happy with the progress being made so far. Anse de Sables as you know is our first venture in really providing a shovel-ready project.” He stated further, “Anse de Sables will be transformed into a micro city, bringing Vieux Fort more enterprise, trade and entertainment services to liven-up the economy in the south of the island.”

One of the upcoming projects for Saint Lucia is Zoetry and Dreams at Canelles, which is a resort consisting of residences and two hotels. Close to 600 permanent staff are expected to be employed upon completion. The total of that investment is estimated at US $300,000,000. Other upcoming projects include a 400-room luxury hotel and private residential development at Choc, Castries, and the Marriot Courtyard Hotel which is to be constructed on 41,979 square-feet of land at Pointe Seraphine. Marriot Courtyard will take the shape of a nine-storey tower with 140 rooms and suites.