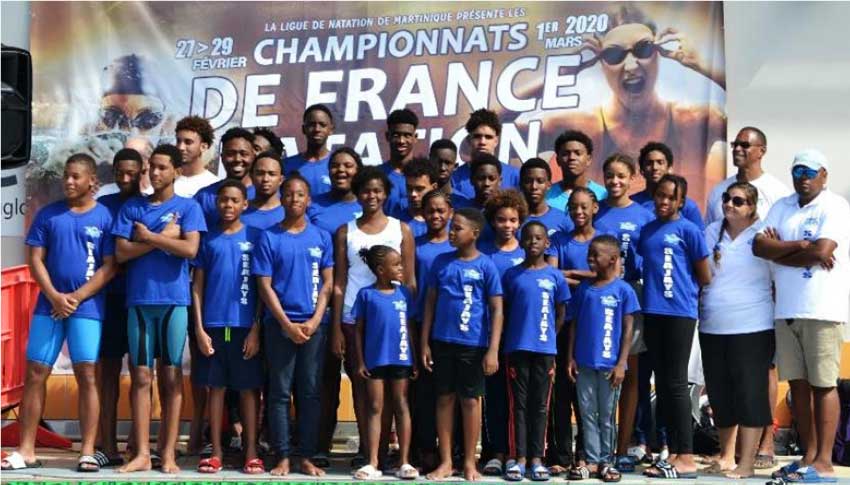 THE Seajays Swim Club copped a total of 39 medals which included 21 gold, 11 silver and 7 bronze at the just concluded Air Caraibes Swim Championship in Martinique.

The Air Caraibes championship is the second part of the Circuit Martinique – a group of five swim meets used for selection to the French Championships to be held in July 2020.

The meet drew 320 swimmers and 10 clubs to Centre Aquatique Communautaire located in Lamentin. SeaJays Swim Club had 30 swimmers registered from the youngest age 7 to the oldest age 22. The team was accompanied by all three coaches – Brian Charles, Norm Banfield, and John McLennon – as well as a team manager and parents.

From all accounts, the meet was an overwhelming favorite of the swimmers and coaches. The performances in the 50 Meter pool from all swimmers demonstrated their hard work and training throughout 2019.

Fayth Jeffrey achieved a new age group record in long course for the female 9 -10 years 100 metre Breast. Last but not least, Jayhan Odlum Smith broke the male 15 – 17 years 200 metre Fly record – this is a new National Record in the event.

It must be noted that competition age groups in Martinique are based on year of birth and different for male and female competitors. As such, many national performers in Saint Lucia, such as D’Andre Blanchard and Caitlin Polius, were ranked among older competitors. Both of these swimmers ranked in the top 10 of the majority of their events.

Younger swimmers such as James Sylvester and Noah Dorville placed in the top 3 of their age group multiple times against their older competitors throughout the swim meet.

The SeaJays Executive was pleased with the overall attitude, performance, and tenacity of the entire team throughout the meet. The display of camaraderie as well as good sportsmanship throughout their trip to Martinique was impressive.

Upon their return, SeaJays Swim Club went straight into the Christmas spirit of giving. Seajays Swim Club embarked upon its year end “good turn” on Christmas Eve when members of the Club fed and brought good-cheer through caroling, to the less-fortunate in Castries.

Although many members were unable to attend due to the mad rush of Christmas Eve and the inescapable bumper -to-bumper traffic that grips the Castries Gros Islet Highway, those who participated and attended maintained the true Seajays spirit and approached the event with as much vigor and fervor as is usually exhibited by the Club when undertaking projects of this nature.

The Club served 87 wholesome, scrumptious, pre-packaged meals comprising the typical Christmas foods including ham, turkey and cake for dessert, prepared and packaged with love by all contributors to this worthwhile venture.

The Constitution Park in Castries came alive with caroling from the Seajays swimmers and parents who assisted in distributing meals, drinks and dessert to the poor and homeless. Members as young as 7 years old participated in the activity.

President of Seajays, Robert Blanchard had this to say of the event: “This cause was worth all of the heat in the kitchen and battling the traffic congestion when we saw and heard the expressions of gratitude from persons less fortunate than ourselves who would otherwise be without a meal on that evening.”

He thanked sponsors including Ramco Plastics Limited who kindly donated the recyclable food containers used to distribute the meals. This kind gesture, he noted, ensured that Seajays played its part in keeping the environment clean.

Massy Stores (SLU) Limited made various contributions of food items towards the venture and the company was thanked for their support in the Club’s various activities throughout 2019.

Sandals Halycon and Harmony Suites had both assisted with preparation of food items towards the cause.

The Executive of Seajays Swim Club takes this opportunity to wish all members, swimmers, coaches, management and staff of the Rodney Heights Aquatic Centre, the Executive of the Saint Lucia Aquatics Federation and all supportive sponsors, a healthy, positive, successful and blessed 2020. We thank you for all the support extended in 2019 and look forward to continued cordial relationships and partnerships with you in 2020.”