From October and December 2017, the Massy United Insurance team has come together to create Christmas Boxes of Love which consists of groceries, as well as monetary donations to enhance the cheer of one family or cause during the Christmas season. 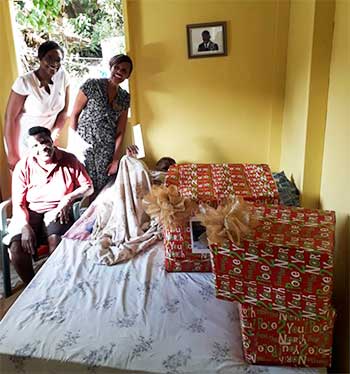 This year’s recipient was Mr. Layne Jean a cheerful young man of Assou Canal, Grande Riviere Gros Islet, who currently suffers from Neurofibromatosis. Neurofibromatosis is a genetic disorder that causes tumors on nerve tissue, including the brain, spinal cord, and nerves, and as a result, has left Mr. Jean with a spinal deformity & unable to fully support himself.

Through a recommendation by Pawosol Pour Timamaye, it became apparent that he was the perfect candidate for this year’s Christmas Box of Love. Mr. Jean’s case has been in the public eye at some point over the years but faded in the background, and this support of food items as well as $500 monetary voucher was very well received by the family overall.

Ms. Faye Miller, General Manager of Massy United Insurance remarked that there is a desire to give; however, the ability might not be there for most. As such, the initiative to spread the process across three months not only helped curb that but also allowed for the expansion of the generosity, as a little added up every day.

This is only the beginning of the Christmas Boxes of Love drive as the Massy United Insurance staff has recognized the need to share beyond their households to boost their social development efforts – a stance perhaps often overlooked for its simplicity in giving back to society.