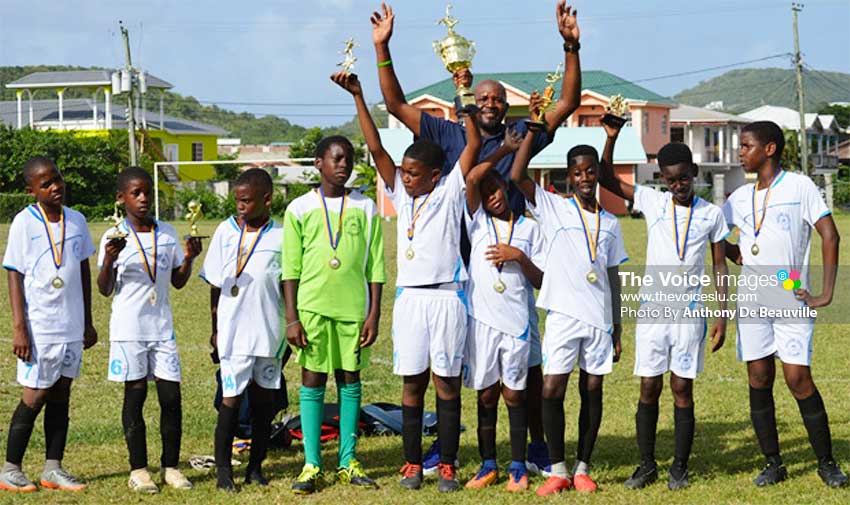 THE Gros Islet Playing Field was a hive of football activity this past weekend when the Gros Islet Football League (GIFL) staged the semifinal, third place play off and final of its Northern Zone Invitational Under 11 Football Tournament in front of an appreciative crowd of parents who came out to lend support to the up and coming football stars.

In semifinal No.1, National Under 11 Champions, Northern United took on rivals GMC United. The game was kept in balance up to the first half with Northern United leading 1 – 0 at the whistle.

On resumption, the Northern United team showed their dominance scoring four more goals to bring their tally to five by the end of regulation time.

For Northern United the goal scorers were Traylon Henry, Jordan Peter and a hat trick from Devonte Herman.

For GMC United their goal scorer was their captain Michael Justin.

Valley Soccer scored four unanswered goals to end the half in control.

On resumption, Monchy United got some help from Cletan Amedee who arrived just in time for the second half. The additional player really helped Monchy United, but goalkeeper Shann Cooper of Valley Soccer kept them at bay. Valley Soccer scored their fifth goal in the dying minute to make it 5 – 0.

For GMC United, the goal scorer was captain Michael Justin with a hat trick.

For the championship trophy, Northern United took on Valley Soccer for the fourth time this year. This final was the third final for 2019 between these two teams at the Under 11 level.

It must be noted that the Valley Soccer goalkeeper made at least 12 saves to keep the score on a respectable front. For Northern United the goal scorers were Devonte Herman, Traylon Henry and Jordan Peter with a hat trick.

For Valley Soccer, the lone scorer was Sebastian Brant.