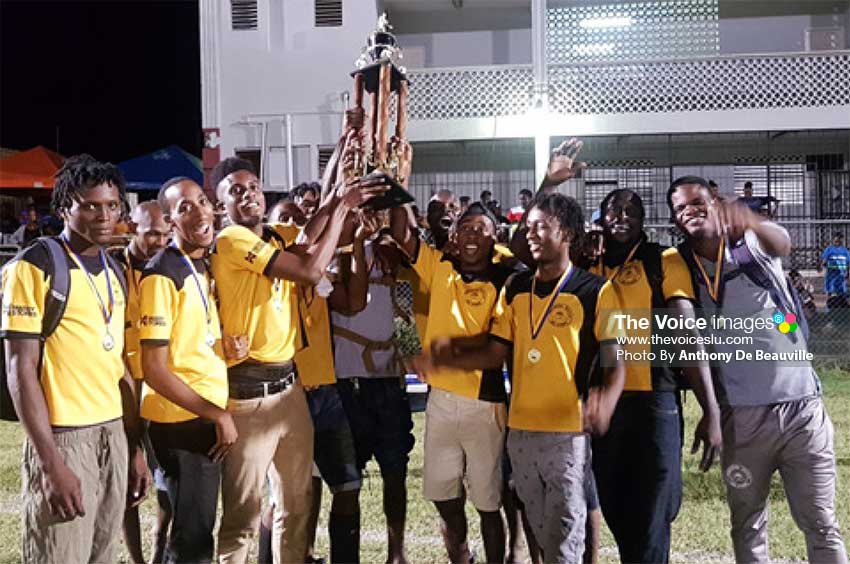 NORTHERN United and Northern Young Stars played out a goalless draw in the final when the curtains came down on Monday evening in the 2019 Gros Islet Football League (GIFL), District Representative competition dubbed, “The Spider Cup” played at the Gros Islet Playing Field in front of an appreciative crowd.

In the third place play off which preceded the final, GMC United defeated Monchy FC 1 – 0, the goal scored by Tonius Simon in the 17th minute. Despite several scoring opportunities on either end of the pitch, GMC United went into the break with a slim 1 – 0 advantage.

It was much the same in the second half as the two teams looked to seize the upper hand, but the pendulum continued shifting back and forth resulting in no further goals being scored.

In the second encounter, the grand final, a Northern United All Stars derby; Northern United’s senior team took on Northern Young Stars. This was the first time in the history of the tournament that two teams from the same club played each other in a final.

On the pitch, from the very first whistle of referee Sabina Kerton, Northern Young Stars No.10 Diego Largent; No. 11 Jahil Evans; No.9 Tarjard Stava, No.7 Linus Clovis and No.8 Naham Ettiene made life difficult for their senior counterparts by not giving them breathing space in a fast paced game.

No. 10 Diego Largent looked the most dangerous of the five when he came close to putting Northern Young Stars ahead during the opening 15 minutes when he cut inside from the right and fired across goal; the shot flashed just wide of the far post.

The scores were locked at 0 – 0 at the end of the first half not withstanding that both teams squandered a combined 7 scoring opportunities.

On the resumption, it was all to play for with the championship title and monetary prize of EC$5000.00 at stake. The two teams came out firing, just as they did in first half. Northern Young Stars was reduced to ten men when Linus Clovis was given a red card by referee Sabina Kerton.

Northern United playing with a one man advantage created several scoring opportunities, but the Northern Young Stars defense denied them the opportunity to do so. It must also be noted that Northern Untied hit the wood work on two occasions.

They had the final chance of the game right at the death, but Northern Young Stars’ goalkeeper Darren Donai got down excellently to deny them that scoring opportunity. At the end of regulation time the scoreline remained 0 – 0 resulting in a penalty shootout.

In the penalty shootout Northern United nosed ahead 4 – 3 to emerge the 2019 champions of the Spider Cup.

Following the showpiece a number of awards were presented: Most Goals – Troy Greenidge; Tournament Emerging Youth Player – Nahum Ettiene; MVP of the Final and MVP of the Tournament – Giovanni Deterville.

Addressing the gathering following the awards presentation, District Representative for Gros Islet Lenard Montoute took the time out to wish the many persons present all the best for the holiday season.

Montoute also congratulated Northern United All Stars senior men’s team for winning the 2019 Spider Cup, and the losing finalists Northern Young Stars. All the participating teams in this year’s competition came in for special mention.

At the end of it all Montoute expressed, “We can safely say we had a wonderful season. I look forward as parliamentary representative to 2020 in sponsoring the Spider Cup. I also look forward to keen rivalry and competition next year. Let me also take this opportunity to congratulate the Gros Islet senior men’s team for winning the Saint Lucia Football Association (SLFA) Inc. Island Cup on Saturday evening at the Phillip Marcellin Grounds when they defeated Vieux Fort South 5 – 4 in a dramatic penalty shootout.”