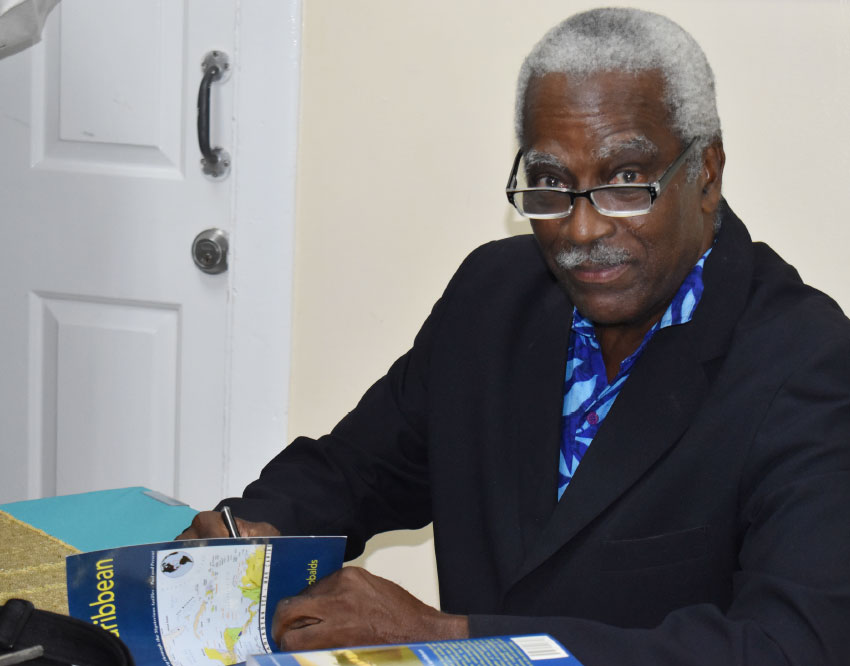 Another Saint Lucian has entered the literary world, one whose wealth of knowledge about the Caribbean has made him perhaps the most suitable person to author a book appropriately entitled “Our Caribbean” with a subtitle “A Journey Through the Mysterious Antilles, Past and Present.”

His friend Winston Springer SR., at the launch of the book last Saturday at the Bay Gardens Hotel stated that “while the author concedes that he is by no means a professional historian, his wealth of knowledge on the annals of the Caribbean journey is evident through the easy to read compendium that summarizes the vicissitudes of the Antillean journey…”

Springer who described the book “as a deep dive into the rich history, geography, culture and unique characteristics of each Antillean territory” further noted that the book is encyclopaedic in its details and concise in its clarity.

Former prime minister and professor emeritus Dr. Vaughan Lewis noted that Theobalds entered into the field with a daring and that the book shows that he had used his experience in academic and practical work in the fields of physical science, particularly engineering.

“An early glance of his book will also indicate that his gradual elevation in this field indicates that his career came into focus not simply on academic based engineering but practically influenced general policy making,” Lewis said.

Calixte George Sr., himself a recent author, told the audience at the launch that Bernard was in a unique position to undertake the writing of the book in the manner in which it is presented.

“He said that among other things like Theobalds love of reading and studying historical and contemporary Caribbean literature, he had the rare opportunity to live and work in several Caribbean countries and is considered a true Caribbean man.

“On reading the book it is obvious that the narrative had been enriched by Bernard’s  personal contacts into interactions and experience at all levels of the regional and social spectrum,” George said.

Theobalds was widely congratulated for his book, which showed experience in academic and practical work in the fields of physical science, particularly engineering.

It was generally agreed that Theobalds lifelong orientation had been influenced not only by scientific and practical changes in the area of electricity but equally by changes in the sphere of having to persistently related to the concerns of human beings.