A man of many talents, Vernon Francois adds published author to his many titles which include former Commissioner of Police of the Royal Saint Lucia Police Force, former President of the Police Welfare Association and national cricketer to name a few. Mr Francois is celebrating the launch of his new digital book publications, ‘Restored Confidence’ and ‘The Police Recruit Training Program’ through publisher, Hailcloud Publishing and he invites you to learn a little more about the books and himself in this author interview. 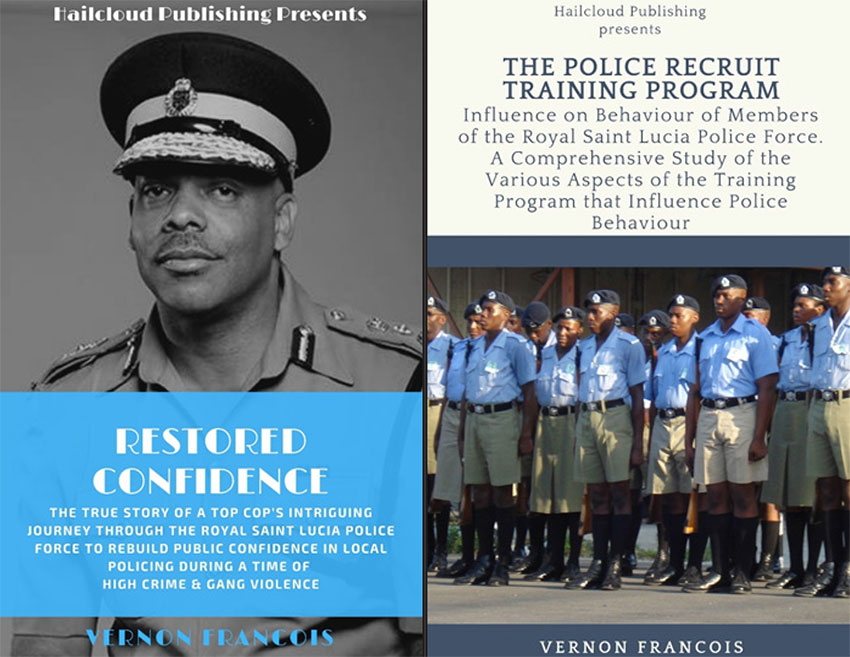 Vernon: I was born and raised in the particularly picturesque village of Choiseul. My early schooling was at the Choiseul Infant and Primary, the then Choiseul Junior Secondary School and the then Vieux Fort Comprehensive Secondary School.

Growing up in Choiseul, I was heavily involved in playing cricket. Through the years, I represented the Choiseul under 19 and Senior Cricket teams, Castries Senior Cricket Team and the Police Sports Club. In fact, I represented the Royal Saint Lucia Police Sports Club at cricket in every rank, including Commissioner of Police, with a degree of distinction. I took the most wickets on the local police side when I played for Police in my penultimate Regional Police Cricket Tournament in 2014.

External to the police force, I was also Chairman of the Saint Lucia White Collar Crime Task Force and Chairman of the local Community Action Program for Safety (C.A.P.S). Most of my regular work during my policing career was in the areas of Criminal Investigations and Court Prosecutions.

I have been happily married for the past 25 years and have 2 adult daughters and 3 absolutely adorable grandchildren. Post my retirement from the police force, I have engaged in consultancy or short time employment with Trinidad and Tobago Police, Royalton Saint Lucia Resort and Spa and Cricket West Indies. I am currently the Lead Consultant of my Firm, PVF Security Consultinc, which is incorporated in Saint Lucia.

Vernon: I have always loved writing and had some opportunities to write articles in police magazines throughout the years. Writing also was a huge part of my policing career as being a detective entailed a daily diet of writing statements and reports. I also had this idea to write my memoirs subsequent to my normal retirement from the Force. My retirement was, however, far from normal and I had a story to tell.

You are currently in the process of having 2 books, ‘Restored Confidence’ and ‘The Police Recruit Training Program’, digitally published with local publishing company, Hailcloud Publishing. Briefly, tell us about each book.

Vernon: My first Book, ‘Restored Confidence’ details my journey in the Royal Saint Lucia Police Force. It commences with my joining the police force and my initial police training in Barbados. It vividly depicts my various experiences during my earlier years to include interesting times as a detective, playing cricket for the police team and being a court prosecutor. It also relived the deaths of police officers on duty and the pain associated with it.

‘Restored Confidence’ vividly details the high level of criminality and social disorder plaguing Saint Lucia about the time I assumed leadership of the police force in 2010 and the generally successful legitimate efforts at restoring confidence and order. There are chapters in the book about the police operation code named ‘Operation Restore Confidence’ and a direct response to Prime Minister Kenny Anthony’s dramatic address to the nation announcing the findings of the CARICOM IMPACS investigation into the Royal Saint Lucia Police Force. Valid political reasons were also advanced in the book as to why the United States Government instituted the provisions of its Leahy Law on the Royal Saint Lucia Police Force.

As such, the book critically explores the recruitment and selection processes for police officers. It also examines the training curricula and surveyed police recruits in training, serving police officers and police administrators involved in the recruit training process.

The book concludes with a detailed analysis of the research findings and the making of significant recommendations which if implemented should redound to better police forces in the Caribbean region and a reduction in nefarious behaviour on the part of police officers.

What inspired you to write each book and how was your writing process different for each book?

Vernon: I wrote ‘Restored Confidence’ because I had a story to tell. I left the Royal St Lucia Police Force under what can be construed as controversial circumstances. As such, it became incumbent upon me to document the truth of my tenure as a police officer and more so as Commissioner of Police. The Police Force which I led achieved a great deal but the great work of most of the officers was overshadowed by factors largely outside the control of the police force.

I also wrote ‘Restored Confidence’ as an opportunity to inspire police officers and persons who aspire to become police officers to read my story of leadership, dedication, professionalism and service so that they can hopefully model their policing career and overall leadership style after my example.

The inspiration for ‘The Police Recruit Training Program’ was to make a contribution through documentation of my experience researching the various factors impacting police behaviour not only in Saint Lucia but other Caribbean islands. It is my fervent hope that this book will be used as significant literature for scholars and other people trying to determine reasons for errant police behaviour. I am also hopeful that government officials and police leaders would utilize the findings to make improvements in the initial training of police officers.

What is the most surprising thing you discovered while writing your books?

Vernon: What I found surprising about writing is that one cannot force him or herself to focus on writing. There are times when as a writer you get an inspiration and everything flows whilst there a times you struggle to put your thoughts together. You have to learn to take the good with the bad as the saying goes.

How long did it take you to write each book?

Vernon: I commenced ‘Restored Confidence’ in earnest in 2016 and completed in the book mid-2018.

‘The Recruit Training Program’ is a subject of research which I conducted between 2011 and 2012. It took about 3 months of 2019 to compile this research into a book.

What would you like readers to take away after reading each book?

Vernon: I would like readers to take away from ‘Restored Confidence’ that policing is an interesting vocation and as the leader of the Police Force I did everything in my power to lead from the front and to engender a professional police Force.

From ‘The Police Recruit Training Program’ I would like readers to take away the importance of the appropriate recruitment, selection and initial training of police officers as a means of engendering proper behaviour and professionalism on the part of police officers.

Are you working on another book?

Vernon: Not at the moment but I have a couple ideas in mind. I will work on them as time permits.

As former police commissioner, is there any advice you would like to give to new recruits of the Royal Saint Lucia Police Force or anyone interested in a career in law enforcement?

Vernon: My advice to new police recruits and other persons interested in a career in law enforcement is that policing is a noble profession. Their mantra as police officers should be of service and professionalism. They should approach the job by considering what contribution they can make to ensure a better police force and country. They should focus on being able to legally justify their every action and concentrate on proper actions and behaviour at all times.

Do you have any advice for local writers, especially on balancing full-time employment, life and writing?

Vernon: My advice to local writers is to focus on time management. Time is not an unlimited commodity and it is important to create the right balance in every aspect of life including their writing.

Where can readers find out more about you and your books?

Vernon: Readers can find out more about me and my books by logging on to Facebook.com/Vernon Francois and Linkedin. I can also be contacted at cellular phone number 1 758-486-9800 (Phone and WhatsApp), Email- Ffrancoisve@hotmail.com or pvfsecconsultinc@gmail.com. I think of myself as a very approachable person and welcome interaction with readers.

Any last thoughts for our readers?

Vernon: I want to thank readers for being interested in my books. My first book was a genuine attempt to paint a true picture of me and the police force which I led. The second book was my contribution as a civilian to the improvement of police officers and law enforcement generally. It is my hope that I can continue to make a contribution through my company and other opportunities. Enjoy reading.

Mr. Francois’s books are available for preorder on Amazon.com and Amazon.co.uk now. Go to https://www.hailcloudpublishing.online/ to find out how to get your copies.