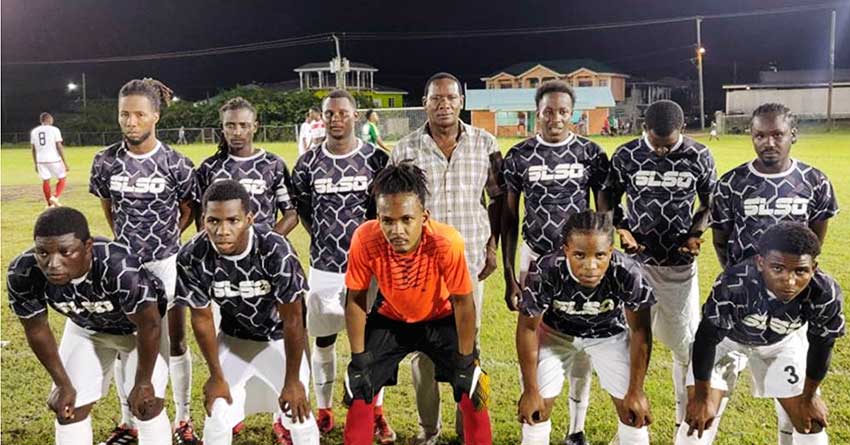 EIGHTEEN goals were scored when matches continued in the Spider Cup sponsored by the National Lotteries Authority and organized by the Gros Islet Football League on Wednesday 6th November 2019 at the Gros Islet Playing Field.

The onslaught was led by Northern Young Stars hammering new comers to this year’s tournament Flames United from the Marchand Football League 9 – 1 after enjoying an unassailable 6 – 1 lead at half time.

They were led with braces (2) by DergoLagen in the 9th and 70th minutes, Jahil Evans the 23rd and 69th minutes and Linus Clovis in the 26th and 63rd minutes. The other goal scorers were Nakim Etienne in the 15th minute, Benjamin Charles 27th minute and TurjardStava in the 38th minute.

For Flames FC, Ted Isaac scored the lone goal in the 30th minute.

In the second encounter, Saint Lucia Sports Online Monchy FC United trounced Police 7 – 1. Troy Greenidge was Police’s main tormentor scoring five goals in the 32nd, 58th, 66th, 86th and 89th minutes. The other goal scorers were Gabrielle Biscette in the 56th minute and Eden Charles in the 90th plus minute.

For Police, David Henry scored the lone goal in the 73rd minute.

They got their goals with hat-tricks from Kylah Solomon and Tanika Solomon with the other from Mikej Francis.

In Game No. 2, played at the Marchand Grounds, Soufriere and the combined team of Gros Islet/Marchand played to an exciting 3 – 3 draw.

The combined team got their goals from Ashantie Lawrence in the 33rd minute, Blossom Flerin in the 37th minute and Melanie Richard in the 65th minute.

Soufriere’s goal scorers were Shamalyn Albert with a brace (2) in the 40th and 59th minutes and the other by Claire Felix in the 7th minute.

Seventeen-year-old Yanick Noel scored a hat trick, Raheem Lionel a brace, and one each from Daniel Sonson and ShakimHunte.

The win was a welcome three points for the Club who has been struggling in the competition thus far losing three and drawing one in their previous four games.

In another game played on the evening GMC United edged out 1987 All Stars 1 – 0.

On Thursday 7th two matches were scheduled in the SLFA President’s Cup at the Phillip Marcellin Ground in Vieux Fort.

In the first encounter T Valley failed to show up for their match against Diamond Ballers.

In the second match played GMC defeated B1 FC 3 – 0, with goals from Shannon Phillip in the 6th minute, Rohan Lambert in the 60th minute and Ricky Leo in the 85th minute.

At the Anse La Raye Playing Field, Flow Lancers FC edged out Togetherness Youth 2 – 1 with both of their goals being scored by Junior Hunter.

In the second game played, 1987 All Stars defeated Bays FC 5 – 2. Lawrence St Croix scored a brace (2), while there was one each from Genesis Christmas, Micah Reid and Dahmanii Berthier.