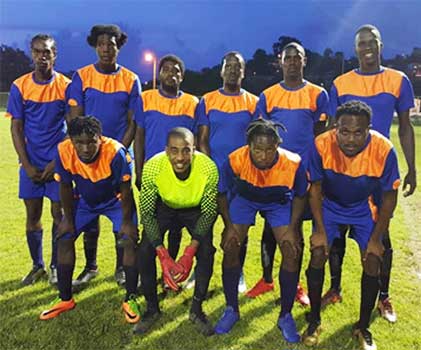 In the first encounter of a double header played at the Marchand Grounds, New Generation FC, after enjoying a 2 – 0 lead at the half time break defeated Bays FC 3 – 0.

For New Generations FC, the goal scorers were Wayne John in the 5th minute, Yanic Noel in the 39th minute and Kiddany Joseph in the 64th minute.

Playing the final game of the evening GMC United edged out T Valley 1 – 0; the goal scored by Josh Harrow in the 19th minute of play.

Also on the same day, at the La Ressource Playing Field in Mabouya Valley, in the first of a double header, RV Juniors and 1987 All Stars played to a 1 – 1 draw.

Wesley Wilson opened the scoring for RV Juniors in the 5th minute, while Lawrence St Croix scored for Anse La Raye in the 28th minute.

For Knights FC, the goal scorer was Jeff Emile in the 28th and 50th minutes.

Flow Lancers FC was able to pull one back in the 45th minute via a penalty which was converted by Casius Springer.

To round off the top four places, occupying the third position is Flow Lancers FC (Castries) with 16 points from six matches and fourth place Victory Eagles (Vieux Fort) with 14 points from 6 matches.

Meanwhile, matches continue today (Thursday 28th), from 6.00 p.m. B1 FC takes on RV Juniors and 1987 All Stars plays New Generation FC at 8.00 p.m. Both matches will be played at the Anse la Raye Playing Field.

Also today, from 6.00 p.m. Diamond Ballers FC takes on Knights FC and Togetherness Youth plays Victory Eagles at 8.00 p.m. Both matches will be played at the Phillip Marcellin Grounds (PMG).