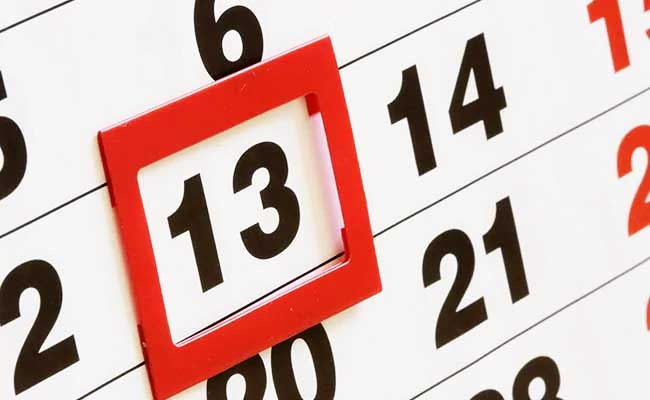 ARE you familiar with the superstition associated with Friday the 13th? Well, that is tomorrow’s date. It has been widely thought of as a day of incredible bad luck and jinxes. Simply put, many people believe it is the day on which the worst of things will befall them. The superstition is so vast that the United States alone is estimated to lose between $800 and $900 million in business on that day simply because people are too frightened to take the necessary flights to conduct the business which they normally would have conducted. Lots of people choose not to go out fearing they may encounter an accident of some sort. Contrary to the above statistics however, is that fewer accidents are reported to occur in the Netherlands on Friday the 13th merely because people drive more carefully on that day, trying to avoid bad luck on the highways. –And of course there are those who simply stay home to avoid bad luck altogether. I have heard several parents, here in Saint Lucia, caution their children to come home before sundown on Friday the 13th. It is one Friday night that many persons decide to remain at home. The ‘sinister nature’ of tomorrow’s Friday the 13th is expected to be more intense as it nears the full moon. Are you a superstitious person? I hope your superstition is not an excuse for you to stay home tomorrow. The 13th day of the month falls on a Friday either once, twice or three times in a year. It will happen twice this year, with the next one occurring on National Day in December.

There are different theories as to how the whole superstition began. Some believe that Friday is an unlucky day and that 13 is an unlucky number; put them together and you get bad luck times two. One popular theory is that 13 individuals dined at the Last Supper on the 13th day of Nisan, the day before Jesus was crucified. Another theory is that Friday the 13th was a day of doom for the legendary warriors known as the Knight’s Templar. They were tortured and ultimately burned at the stake in France in the year 1310, after being accused of various offenses such as heresy and devil worship.

Many catastrophes, which may have been caused by negligence or other causes, have coincided with Friday the 13th. Perhaps it is the combined faith of the millions of people who believe in this superstition… who expect the worst to happen on Friday the 13th, which creates the atmosphere for something bad to actually happen on that day. Human beings need an explanation, a reason or superstition for everything which happens in the world. With eight billion people on the planet, something bad (or good) is bound to happen to somebody somewhere. Let us hope that it does not happen to you, to me or to any of our love ones. But if it does, let us not blame it on Friday the 13th. The main thing is for us all to be careful, conscientious and considerate of others regardless of what day it is. It is our intention and our actions which mostly determine the outcome of the day and not the date which numbers it.