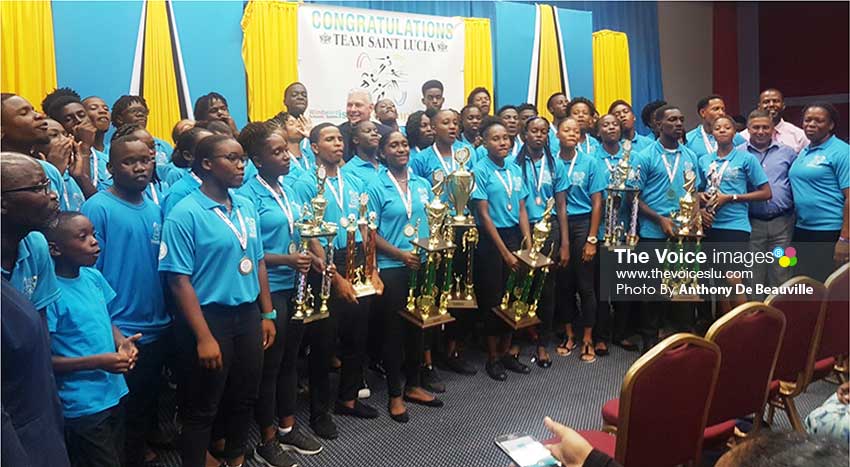 IT was standing room only at the Financial Administrative Centre in Pointe Seraphine last week as the celebratory atmosphere was palpable for Saint Lucia’s victorious contingent from the 2019 Winlott Canadian Bank Note (CBN) Windward Islands School Games (WISG) who were honoured in an awards ceremony.

After intense competition in the Commonwealth of Dominica from Sunday 28th July to Sunday 4th August, the eight year winning streak of defending champions Grenada was finally broken, and the WISG championship title was brought home to Saint Lucia.

“You’ve made us all very, very proud,” Deputy Permanent Secretary in the Ministry of Youth Development and Sports, Liota Charlemagne-Mason told the students. “You have every reason to celebrate for you have earned bragging rights. The victory is indeed satisfying when considering that our secondary school sports programme is not where we want it to be as yet, but I can assure you that we are working feverishly to present you with a new experience in the coming year.”

At the ceremony, individual honours were bestowed to Team Saint Lucia’s Most Valuable Players and athletes who medaled. In Track and Field, Saint Lucia won 23 medals; eight gold, five silver and ten bronze.

Three year WISG Volleyball player, Matilda Angeloni spoke on behalf of the student contingent stating that the experience was an amazing one.

“I know all the players on the team by name, surprisingly,” she said. “I’ve never been one to socialize much, but I found myself being so supportive for every single sport.”

“You have every right to be here and to be celebrated for your achievements,” she said. Like I said to the footballers in their chatroom, this year’s team captains were a special group. They led the teams very well and that is why we are here celebrating your achievements as champions.”

The student players were also commended for giving a good account of themselves in the remaining sporting disciplines- which contributed to the overall victory. In Athletics and Girls Basketball, Saint Lucia came second to Grenada and Dominica respectively. In Football, Team Saint Lucia secured third place, and fourth place in Boys Basketball. Also recognized at the ceremony was the work of the coaches, team managers, chaperones and parents.

Prime Minister Allen Chastanet was on hand to congratulate the victors, reiterating his administration’s dedication to young sportsmen and women.

“The reason I’m here today is to really congratulate you on what you’ve achieved,” he said. “The timing of you winning at the WISG put a lot of wind under our sail and I want to thank all of you for making that happen. I want you to know that your government is absolutely committed to sports.”

In closing the Prime Minister held the 2019 championship trophy aloft and said, “Believe it or not this is the most important trophy, and this is the trophy all of you should be proud about because it took all of you to be able to make it happen and that’s the difference.”

To top off the awards evening Prime Minister Chastanet surprised the student players, announcing that they would be treated to a Carnival Sailing Party Cruise. Team Saint Lucia’s refreshing achievement comes over a decade since its last win at the WISG.