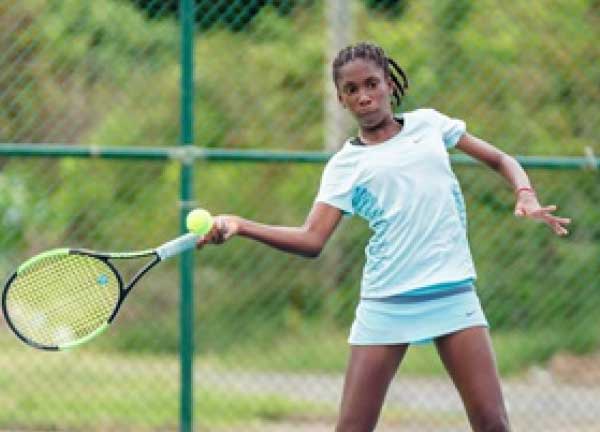 The National Tennis Centre in Beausejour will come alive when the Saint Lucia Tennis Association (SLTA) in collaboration with Sagicor and the Confederation of Tennis of Central America and the Caribbean (COTECC) stage the Under 12 and Under 14 Tennis Tournament starting today (Saturday 10th) and ending on Thursday 15th August 2019.

Players will be defending their points and throughout the tournament they will be trying to attain additional points towards their rankings.

The 2019 tournament has been promoted to Grade One by COTECC and more points are up for grabs. This is the first time Saint Lucia is hosting a Grade One COTECC event.

On the home front, Coach Vernon Lewis, Ron Blanchard, Dean White and Scyla Murray have been working with the national teams preparing them for all regional tournaments. Training for this event in particular has been ongoing for the Saint Lucia players as this is Saint Lucia’s biggest U12 and U14 tournament for the year.

A tournament at this level requires high intensive training and male and female athletes alike have been undergoing the same. In the 12 and Under event Saint Lucia will be represented in the girl’s category by Latoya Murray, Amara Jn Marie and Brianna Jn Baptiste.

The VOICE spoke to Tournament Director, Skyla Murray about the tournament and some of the overseas players coming to compete. Murray said, “We have 14 countries participating and we at the National Tennis Centre are happy to welcome them to Saint Lucia. Trinidad and Tobago has the biggest contingency of 20 athletes including No.9 COTECC, Luca Shami AND No. 18 in COTECC, Cameron Wong”.

She said, “The No.1 seed in the boys draw Antonio Chavez from Honduras ranked No. 7 in COTECC; and semifinalist from the recently held JITIC Caribbean Championship in Trinidad and Tobago, Mackai Whitter of Bermuda will be one to watch on centre court”.

“The girls draw one expects a high level of play with the likes of top ranked players Serena Bryan (Barbados), JordaneDookie (Trinidad and Tobago), and Rosario Elmundesi from the Dominican Republic,” noted Murray.

Meanwhile, the SLTA is encouraging members of the public to come out in large numbers to support team Saint Lucia as they battle against some of the region’s best under U12s and U14s on centre court.

SLTA also thanked Sagicor for their continued support towards the development of tennis in Saint Lucia and for coming on board for a second year to host this prestigious tournament.