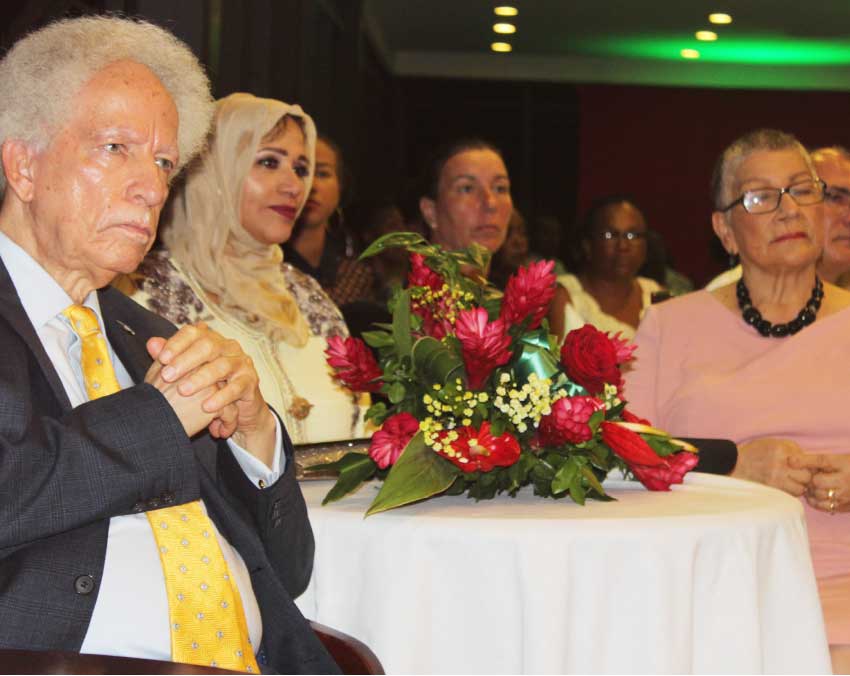 It was a distinguished gathering of ladies and gentlemen who, on Tuesday at the Coco Palm Hotel gathered with the Moroccan Ambassador to Saint Lucia and the OECS His Excellency Abderrahim Kadmiri and wife, to celebrate an historic occasion on the Moroccan calendar, the 20th anniversary of the accession to the Throne of His Majesty King Mohammed VI.

It was also a time for Morocco and Saint Lucia to expose to the world the bond of friendship they share as noted by His Excellency Sir Neville Cenac.

He not only lauded Morocco’s commitment to promoting democracy throughout the Middle East and Africa and what such a movement brings, like free speech or the right to dissent for example, but also highlighted the country immense effort at stabilizing and improving Saint Lucia’s agricultural sector, offering scholarships to Saint Lucian citizens and providing technical and other assistance to Saint Lucia whenever called on.

In Sir Neville’s words the world knows what it is to have a friend like Morocco. Ambassador Kadmiri for his part explained Morocco’s efforts at maintaining that friendship with Saint Lucia and the OECS.

“On the international scale many accomplishments were carried out, most importantly reinforcing the country’s foreign relations, not only through a big diplomatic and economic leap but mainly on south-south cooperation which refers to exchange of resources, technology and knowledge between developing countries, also known as countries of the Global South,” Ambassador Kadmiri said, noting that Saint Lucia and the Caribbean are all part of that .

“Morocco has been working very hard to preserve our partnership with the rest of the world on the basis of respectful relationship either towards our neighbours in the north or in faraway countries all over the world,” the Ambassador added.

He said Morocco is keen about its African roots proving so by returning  to the African Union on January 30, 2017 after more than three decades of its withdrawal, confirming by this act the high meaning of belonging and loyalty to principles and values.

Ambassador Kadmiri spoke of his country’s multifaceted approach to countering terrorism through hard security measures, regional cooperation, intelligence and legislation and the promotion of his country’s religion, Islam. Based on tolerance and harmony between faiths as well as between believers.

“We are clearly committed to enhance, more and more, better relationship and further cooperation with Saint Lucia as well as with the other nine countries that our embassy is covering. As from September all the programmes of cooperation will take a new turn and dimension through updating the exchange of visits of our experts in the fields of healthcare, agriculture, education, tourism and diplomacy as well as the organization of vocational training stay in Morocco,” he said.

“In this regard,” noted Ambassador Kadmiri “I am pleased to announce that as from the beginning of next October all fertilizer shipments will reach their Caribbean destinations. Saint Lucia will be the first recipient of this commodity benefiting local farmers.”