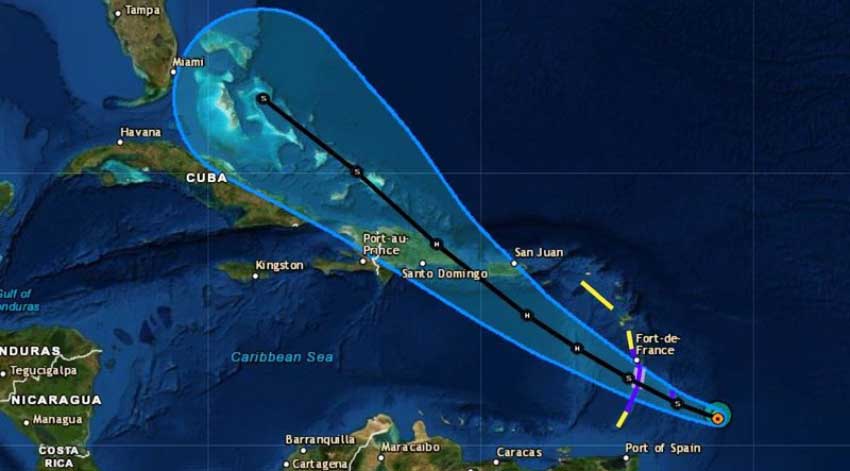 ACCORDING to the National Hurricane Center located in Miami, Florida, a tropical storm warning was put in effect for Barbados, Saint Lucia, and Saint Vincent and the Grenadines on Monday, August 26th. Tropical Storm Dorian, at the time of this report, was advancing westerly toward the Windward Islands at a speed of approximately 14 mph (22 km/h), with maximum sustained winds of 60 mph (95 km/h) with higher gusts.

The Government of Saint Lucia, on August 26th, issued a hurricane watch for Saint Lucia. Tropical Storm Dorian was at the time observed to have the propensity of developing hurricane strengths during its passage on Tuesday. Rainfall between 6 to 10 inches was also expected across the Windward Islands. Prime Minister Allen Chastanet during a press conference yesterday morning declared that the country would be officially shutdown at 6 pm that day. The Prime Minister stated that Tropical Storm Dorian was expected to become a category 1 hurricane by the time it impacts Saint Lucia. He remarked, “It is important that we take this extremely seriously… six to ten inches is a lot of rain and so therefore everybody should be taking the necessary precautions.”

Business operations were shut down in Barbados from 10 am on Monday August 26th in preparation for the passage of the storm. The University of the West Indies (UWI), also on the same day, announced the early closure of all its offices in Saint Lucia from 12:30 pm. Leeward Islands Air Transport Services (LIAT) has cancelled several flights as a result of the storm’s passage. The opening of the Suarez Brothers’ Circus which was scheduled for last weekend was also postponed as the circus tent had to be put down due to the approaching storm. The Saint Lucia Roots and Soul Music Festival was reported to have run smoothly and undisturbed by adverse weather conditions. Persons are advised to take the necessary precaution to minimise storm risks.

Opposition Leader, Philip J Pierre, yesterday, disseminated a video in which he expressed a word of caution to Saint Lucians in regards to the storm. “We are saying to all Saint Lucians to take the maximum precautionary measures and do not listen to any rumours,” Pierre said. He added that he was very concerned about the imposing dangers of the storm and went on to state, “The Opposition is willing to work with the Government because disasters are everybody’s business and we remain ready, willing and able to work with the Government in the event that there is any loss of life or loss of property or any damage caused by this storm.”