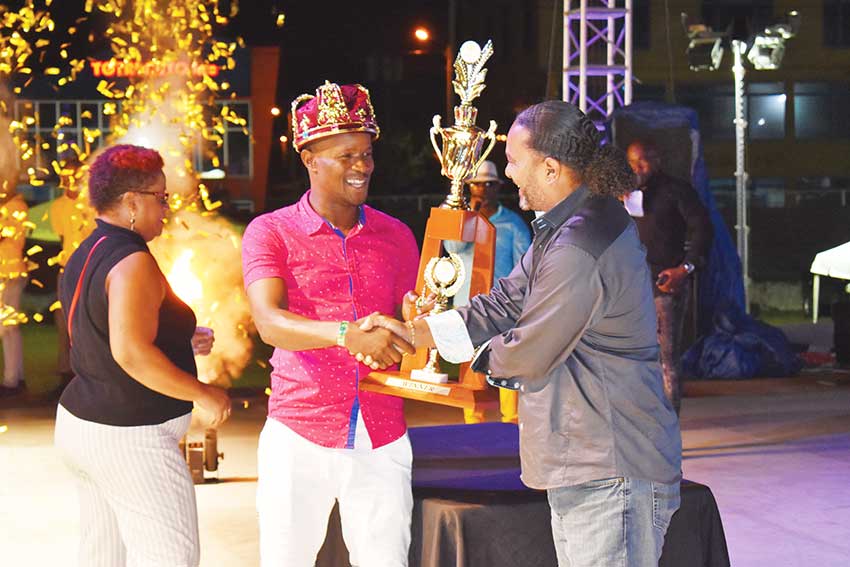 Saint Lucia Calypso Finals was hosted at The Sab on the night of Saturday July 13th. This was the place to be for all Calypso lovers and a time for new love to be inspired in the hearts of upcoming musicians. Nine Calypsonians battled to capture the crown against TC Brown who battled to defend it. They were, in order of appearance, Chocolate, TC Brown, Ready, Taker, Teddy Boy, Walleigh, Ti Carro, Juice-man and Educator.

One of Educator’s performances took place in a boxing ring, but it was politicians and not calypsonians that he knocked out in the second round. All ten competitors gave a satisfying performance as the audience could be seen enjoying themselves. People danced as music filled the air after the first round of the competition. They seemed patient for the commencement of the second round, but quickly gathered before the stage when the hosts, Pringles and Gilroy Hall, announced that it was about to begin. Ti Carro came in at number eight and cheers rose from the audience the instant his name was called. He performed the song entitled “Remote Control” and with it, he tuned both the audience and the judges into his own network. In a surprise verse written specially for the finals, Ti Carro proclaimed that he had come for the crown. In this verse he sang the words, “And tonight I come for de crown, so tell TC bring it back!” The audience applauded his performance much more enthusiastically than they applauded that of the other performers. During the announcements of the results, Ezi Hall asked the audience who they thought the winner was, and the audience responded with a resounding “Ti Carro!” The audience had definitely chosen their winner. The third runner-up was Menell with 728 points; the second runner-up was TC Brown with 736 points and the first runner-up was Walleigh with 765 points. At this point the crowd began to chant the name “Ti Carro”; and with a total of 791 points, Ti Carro emerged as the new Monarch of Saint Lucia Calypso. The audience went wild with jubilation when Ti Carro was declared the winner of the competition. He bounced onto the stage, taking multiple bows while throwing kisses of appreciation to the crowd. He was awarded the winning trophy by the Chairman of the Cultural Development Foundation (CDF), Daniel Belizaire, while the Calypso crown was placed on his head. After that he sang one verse of his song “Remote Control” and had an interview with the press. Ti Carro went on to express gratitude for the support that was given to him throughout the competition. He remarked, “Nobody in the world can replace this manager of mine… whatever he has to do he does it. Mr Nigel Francis, ‘Thank you’. The people of Saint Lucia… I love you. Thank you for being there for me all these years. Thank you very much my people!” The new King of Calypso also had some words of inspiration to share with his listeners. He said, “To achieve you must work hard. You mustn’t give up. Every year I come, sometimes I don’t make it, sometimes I don’t place… yeah, I go back home a little despondent but it doesn’t take away the fact that you can come back tomorrow, rebuild and do it again. I am excited. I am happy that I can be that model for the generations to come and prove that when you work, if you fail, don’t worry. Keep doing it, you are going to be successful someday.”
Share this post