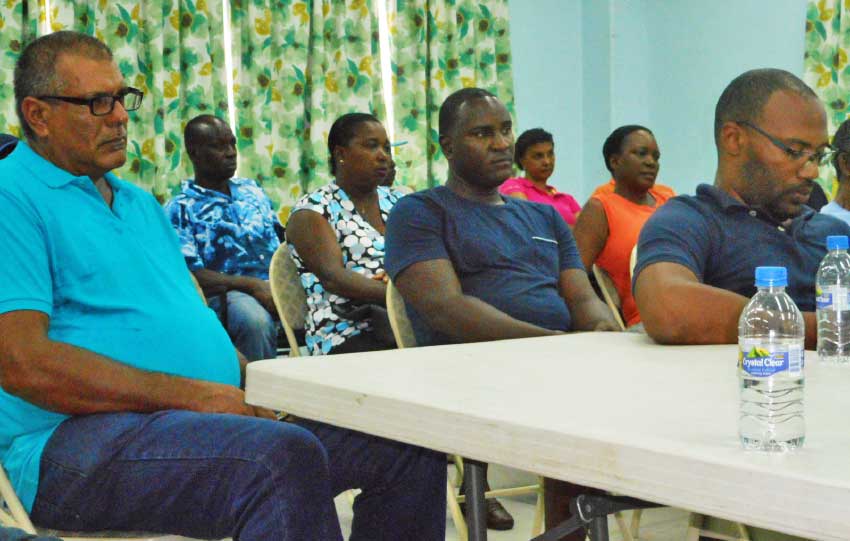 The Saint Lucia Pig Farmers Association is in a very difficult position, which could lead to its closure if not improved soon.

That’s according to the Registrar of Co-Operatives, Egbert Stevens, who was at the time addressing pig farmers at a meeting held at the conference room of the Vieux Fort Fisheries Complex last week.

The meeting was called by the Saint Lucia Pig Farmers Association, which has been dormant for a number of years. The purpose of the meeting was to hear the concerns of the farmers and chart the way forward for the association.

“Based on the Co-operatives Act, the association should be closed by now,” Stevens told the farmers.

“Re-organize yourself. The association is not functioning…” he added.

He warned them to put concrete plans in place, which he said he expects to be implemented in the next few months.

“You need an office, you must keep records, you must have a work plan,” he told the farmers, who listened intently.

The farmers expressed their determination to see that the association survives, amid all its challenges, which they feel are surmountable.

President of the Association, Horace Walters, former Chief Fisheries Officer, described the problem as very serious, adding that they were not the ones who created it.

According to Walters, they will meet with the Minister of Agriculture, Ezechiel Joseph soon to discuss their concerns, which include issues to do with cold storage.

According to Walters, the lack of a market for their produce has forced some farmers to operate as beggars. He said that they have problems selling their produce, and if they do sell it, they can’t get a good price.

“We have to go cap in hand, and beg the local businesses to buy from us,” he lamented.

He said their cost of production is so high that they are unable to cover it.

In venting their concerns, the farmers said certain unscrupulous local merchants are taking advantage of their situation by buying pork from some farmers for as low as $4.50 a pound, which is unacceptable. They say these merchants along with a few large pig farmers control the industry, which leaves the majority of the farmers suffering.

This was confirmed by an official of the Ministry of Agriculture who attended the meeting.

The farmers at the meeting accused certain farmers of contributing to their plight. According to them, when some farmers agree to sell their pork at a particular price to a merchant others go behind their backs and offer the merchant a cheaper price.

“They are fighting each other down. They are aiding and abetting…” a farmer lamented.

Another said: “The government needs to assist farmers by putting certain laws in place to protect us from being exploited by certain business people.”

Farmers say they would like the government to provide them with a central location to sell their produce, which would help remedy the situation.