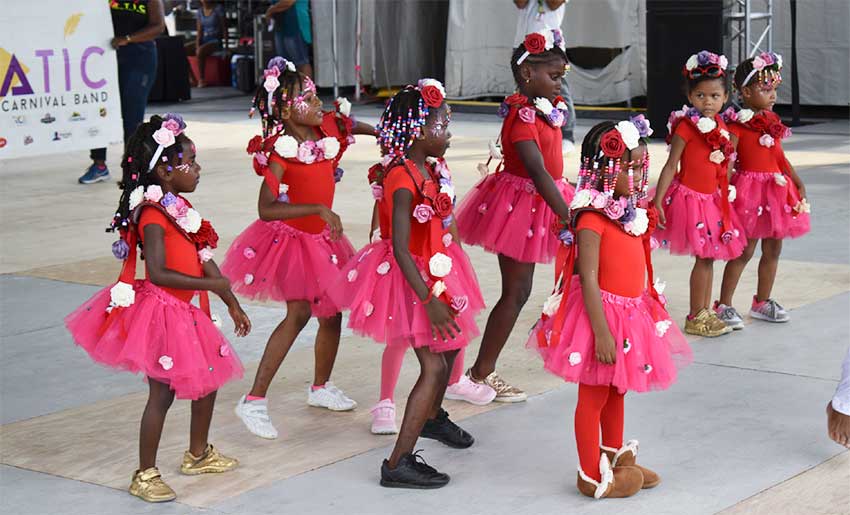 On Sunday July 7th, a total of eight Junior Carnival bands, with an estimated 600 revellers, took to the streets of Castries in all their splendour and vitality. The bands began their march at the Derek Walcott Square. They progressed from Micoud Street and turned right on Bridge Street. They turned right again from Bridge Street onto Jeremie Street and moved up the John Compton Highway toward The Sab in Vigie, where the bands were put on full display on stage before the judges. The bands which crossed the stage were, Harmony “Dingolay”, Nous Wivay “Carnivalis”, Xtatic “For the Culture of Storytelling”, Explosive “Iconic Cultures of Mother Helen”, RoyalitesXtreme “Story of Carnival”, Splash HD “Colours of My Emotion, Insommeil “Colours of Motion” and Gros Islet “Something Fishy”.

Youngsters of every age were adorned with costumes of brilliant colour. Crowds of spectators moved along the sidewalks in pace with the bands. The crowds converged on The Sab to witness the portrayal of the various bands. In the end, it was Gros Islet’s “Something Fishy” with a total of 427 points, which emerged as the 2019 Junior Carnival Band of the Year. In 2nd place with 400 points was Nous Wivay, in 3rd place with 378 points was Xtatic, and in 4th place with 376 points was Royalites Extreme. The Junior King of the Band was Shaz Nathan Lucien from Gros Islet’s “Something Fishy”, and the Junior Queen of the Band was Daniella Theophilus of XtaticXtreme. For all the parents of the Junior Carnival Revellers, their sons and daughters were all winners!