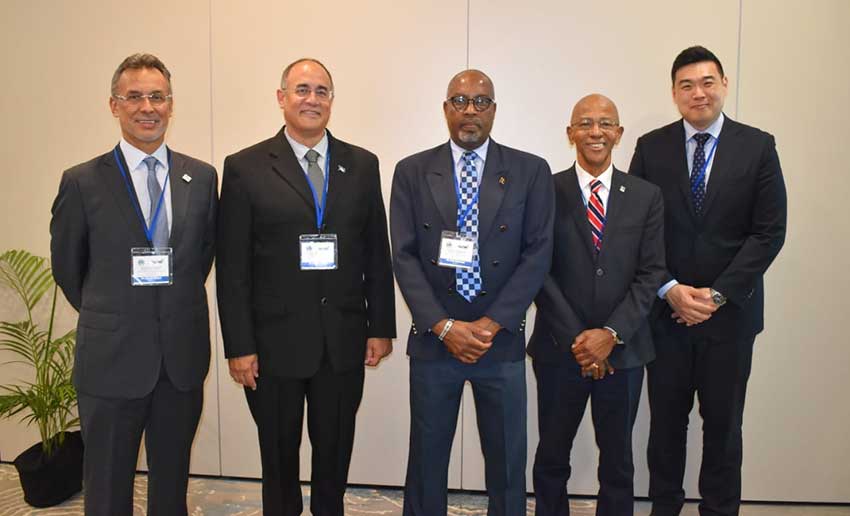 The Saint Lucia Development Bank (SLDB) and Caribbean Development Bank (CDB), last week hosted a three day conference for development financial institutions throughout the Caribbean region. The conference was held at Harbor Club from Wednesday 24th – Friday 27th, and was centred on presentations and discussions on new knowledge on development banking, and on the challenges faced by the sector in the region. The conference also focused on strategies for improving financial and technical assistance which will foster the growth of micro-businesses within the region.

Thomas Park, the Vice President of Operations and Strategy of the Business Development Bank of Canada was also present at the conference. He observed, “What’s really interesting is that the Saint Lucia Development Bank and the Caribbean Development Bank are hitting the key issues that they should be addressing. –And it’s really interesting to see their forward thinking and how innovative they are.” Park said that it was important for him to learn about issues that affect the Caribbean which are similar to the issues faced in Canada. He said that both the Caribbean and Canada are facing the same dilemma which poses the question: “How do we deal with development versus generating a profit so we can be sustainable?”

Park said that it was a great time for the Caribbean’s development banks to leap ahead of older banks which were built for the twentieth century economy. Park said that due to heavy operation expenses and other factors, many older banks are undergoing a digital transformation, which will take time considering the size and scale of these institutions. He said that this presents the development banks in the Caribbean with an opportunity to leap ahead in digital transformation which will lower cost and increase reach. Park said that he hopes the dialogue and candid conversations which began at the conference will remain open, as it is important for all participants to work together in order to solve their problems. He said that banks in the Caribbean region are all part of a community and that it is important for them to problem-solve together.

The conference was hugely commended by those in attendance for the wisdom which was shared. Milverton Reynolds, Managing Director of the Development Bank of Jamaica Limited, said that he was grateful to SLDB and CDB for organising the conference. Reynolds, in suggesting the conference be held on a regular basis, remarked, “I would suggest to CDB that a conference of this nature, with all the Development Institutions present, should be held at least every two years, –because the collaboration; the networking; the exchange of ideas; seeing what others are doing, what we are doing and how we can help each other… that, is what is going to result in development financial institutions in truly delivering on their mandate of facilitating growth on development, and making sure that there is participation and financial inclusion, in particular, of the micro, small and medium enterprises.”

Reynolds also expressed the hope that CDB will place greater emphasis on concessionary lending. He stated, “I am hoping that CDB would have heard us very clearly, that the matter of concessionary lending is something which they need to make sure there is a major focus on, and that they can deliver on that for the development of financial institutions in the region.”

Edgardo Alvarez, Secretary General of ALIDE, which is based in Peru, was also present at the conference and he too expressed how important the conference was for him. In speaking about the conference, Alvarez stated, “It was extremely interesting and important. If you know something and it’s just in your head it is worthless unless you share it with other persons. So, what we’re doing here, at this conference, is sharing the knowledge between different organisations and different banks; that is the best way for us to develop and grow.”