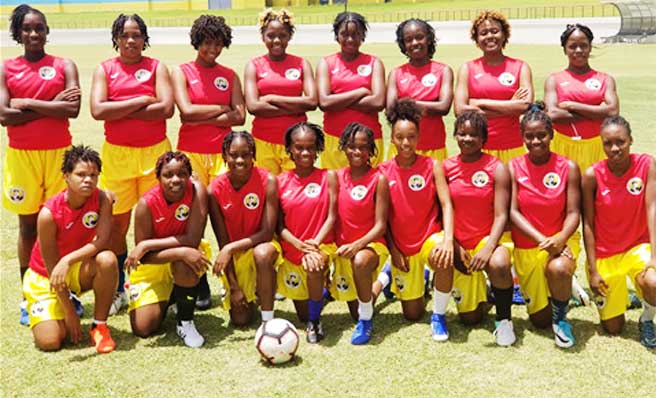 On the heels of the successes of Saint Lucia’s national senior women’s football team, which placed second in the Windward Island Football Association (WIFA) Tournament this past weekend at the Daren Sammy Cricket Ground, Saint Lucia’s Under 20 women footballers will be looking to pull out all stops to qualify for the knockout stage of the Confederation of North Central American and Caribbean Association Football (CONCACAF) starting this weekend in Guyana.

The 18 players and three team officials left the island on Thursday via George F.L Charles airport.

Team Saint Lucia has been drawn in Group A along with Antigua and Barbuda, Bermuda, Suriname and host nation Guyana. While in the South American country, Team Saint Lucia will be looking to go one step further by qualifying for the knockout stage.

Coach Emmanuel Belasse’s side will face Suriname on Saturday 13th July from 6.00 p.m. in their opening game before taking on Bermuda on Monday 15th from 6.00 p.m; Antigua and Barbuda on Wednesday 17th at 6.00 p.m. and then host nation Guyana on Friday 19th from 8.30 p.m.  The top two finishers of each group will advance to the knockout stage of the Championship.

The VOICE spoke to Coach Belasse on Wednesday about team Saint Lucia’s expectations in Guyana. He said, “In as much as Saint Lucia did not win the Windward Islands Football Association (WIFA) Tournament; I think the performance of the team created a spark with our Under 20, Under 17 and Under 14 players; the amount of work we have put in to get the team prepared gives every indication that there is a level of readiness.”

He added, “We are not going to Guyana just to participate; we are ensuring that we are going there to compete. The girls are confident and I am optimistic in the performance of the team. We are hoping everything comes to plan. We are going out there to perform to the best of our ability.”