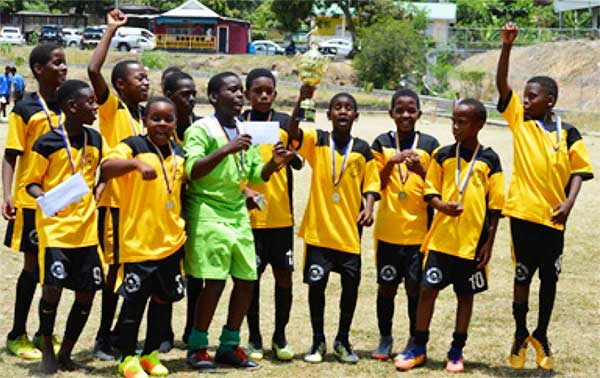 In near perfect playing conditions on Saturday 22nd June at the SAB Playing Facility, patrons were treated to some fascinating football as the semifinals of the St Lucia Football Association Inc. Under 11 competition got under way.

In pulsating action between Northern United All Stars and Valley Soccer, Northern United opened the scoring with a Traylan Henry goal in the 2nd minute of play. From then on it was total entertainment as the players from both teams demonstrated a tremendous amount of poise and finesse which kept the lively group of spectators, comprising mainly parents and family, riveted.

Valley Soccer threw everything at their opponents, the Northern Zone Champions Northern United, in quest of the equalizer, which failed to materialize as they held steadfast.

When the final whistle was blown it was a relieved and jubilant Northern United who were basking in their 1-0 victory.

Both teams must be credited for the high quality of football and sportsmanship displayed, particularly as this was the third meeting between these two teams for the year.

The other semifinal between Southern teams, Shamballa out of Vieux Fort and Black Panthers from Soufriere did not disappoint, and how ironic and unfortunate that one of these two teams had to miss out.

This game was a repeat of the Southern Zone Final which Black Panthers won. However, this time around it was a different ball game as both teams played some solid football, which captured the hearts of many.

Unfortunately, neither was able to break the deadlock as the game ended goalless at the end of regulation time.

It was then down to the dreaded penalty shootout.

In the end Black Panthers prevailed 1-0. Credit to both goal keepers who performed admirably in the situation.

The grand finals of the under 11 Championships will now be played on Saturday 29th June 2019 at the SAB Playing Facility from 10.00 a.m. between Northern United All Stars and Black Panthers.

Meanwhile, the semifinals of the under 13 games which was carded for the SAB Playing Facility had to be called off because of the persistent rain.