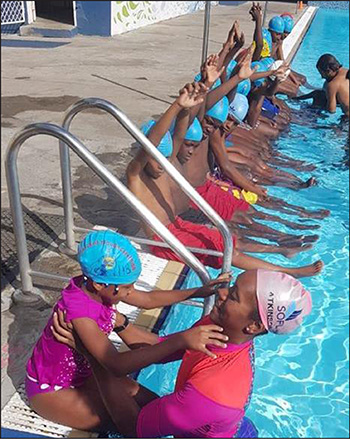 Alia participated in both the 2004 and 2008 Olympics and won the 100-metre breaststroke at the 2014 Short Course World Championships in Doha equaling the record set by Rūta Meilutytė in 2013. Alia then became the first black woman to win a world swimming title and Jamaica’s first gold swimming medal in a World Championship.

The Swim clinic comprised 18 competitive swimmers and 19 Learn-to-Swim kids from Baron’s Drive in Soufriere, who were enamored by the charm and class of Alia during her sessions. These qualities were further enhanced by her world-class range of flexibility and delivery of stroke technique.

Her ability to switch from theory to practical gave participants a full ‘hands on’ perspective on how to improve their swimming technique. Alia’s underwater and wall work had the swimmers tingling with excitement wanting to either try it or see if they could take up the mantle and accept her challenge.

Swimmers were equally exposed to various aspects of mental preparation going into their races. Affirmations and goal setting was also a vital part of Commander Alia’s clinic. She also shared some of her experiences participating in various age group swimming competitions, her challenges and how she overcame them to become the champion she is today.

The atmosphere created by Alia allowed all swimmers to participate without fear and longing for more correction, more advice and more time.

Alia also had the pleasure of meeting the Governor General Sir Emmanuel Neville Cenac who hosted a fundraiser on behalf of the Saint Lucia Aquatics Federation.

The Alia Atkinson Swim Clinic was an awesome event for St. Lucian swimming. The excitement and burning desire for swimmers to want to excel was evident and Alia’s presence lit that spark and unleashed greatness.

A special thank you to the parents and swimmers who took this leap of faith. In addition, the Federation would like to thank the Bay Gardens Beach Resort and Spa, Invest Saint Lucia and the Saint Lucia Hotel and Tourism Association for making this moment a raving success.