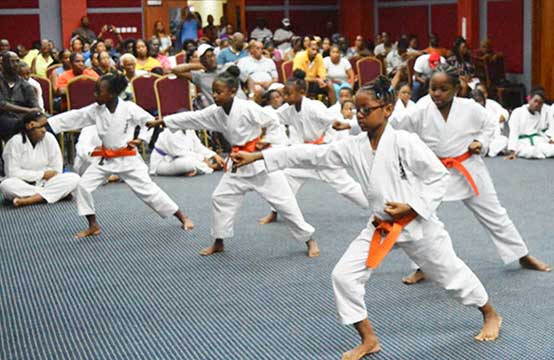 IT was standing room only when the Shotokan Karate -Do Federation Saint Lucia held its 49th examination in collaboration with the Saint Lucia Karate Federation (SLKF) on the 5th floor of the Finance Administrative Centre in Pointe Seraphine recently. A combined 79 male and female karateka’s moved from White, to Yellow, Orange, Green, Blue, Purple, Brown 2, Brown 1 and 1st Degree Black belt levels.

The highlight of the evening was 8-year-old Liam Ernest (Challenged Athlete and a member of the Saint Lucia Bushido Shotokan Karate Academy, who moved from White to Yellow belt (first time in the history of the sport in Saint Lucia); and Black Belt (1st Degree, Shodan) Claudius Athill; Twinki Stephen; Analee Stephen and Malik Peter.

Addressing the gathering was President of Saint Lucia Karate Federation, Oliver Lawrence. Lawrence welcomed all the participants and wished them well in their respective examinations. He also thanked invited guests for coming to lend their support to the young ones.

He added, “The 49th examination is a prime example of what all affiliates should engage in. Affiliates must develop and manage their affairs and put on activities like this. You must take this business seriously. Karate is international; worldwide there are programmes available, but it is equally important that we manage our affairs well and effectively.”

“We are going places, but I ask for one thing, and this is your continued support for the sport in Saint Lucia,” Lawrence noted.