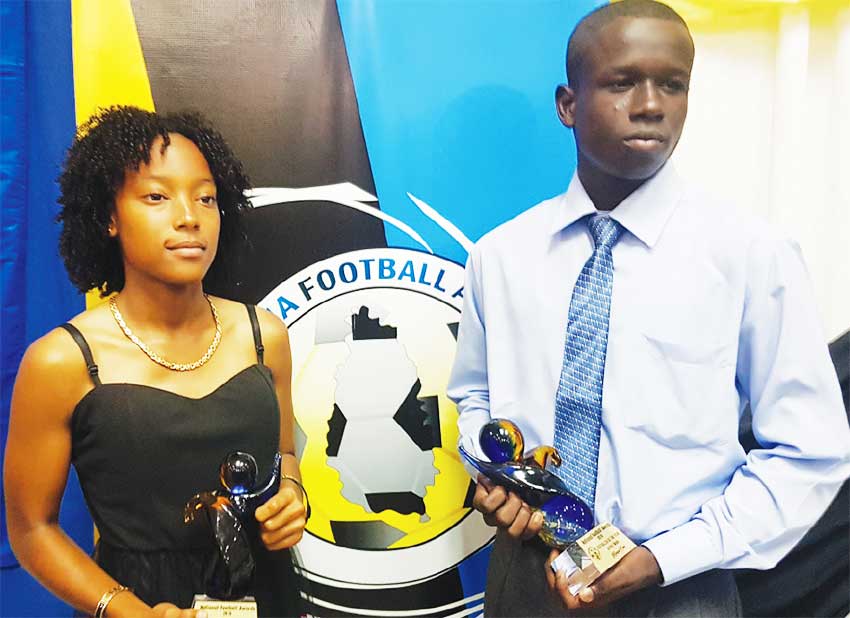 KRYSAN St. Louis and Keegan Caul are better known for their prowess on the football pitch, which was rewarded when they walked away with a number of prizes at the annual Saint Lucia Football Association awards held at the Marina Haven Hotel in Rodney Bay Saturday evening.

Three of the four nominees for junior and senior male and female footballer of the year and a number of other individuals made podium calls. One noticeable absentee was former Referee, Giles Arthur who captured the, Life Time award, Referee Andrew Phillip collected on his behalf; interestingly Phillip collected the Referee of the Year award ahead of two other nominees, Nigel Mathurin and Lestroy Joseph.

The Junior Male Footballer of the Year award went to prolific goal scorer for Central Castries, Keegan Cual. In the senior category, the female award was captured by Elisha Marquis; Pernal Williams copped the male.

The Club Coach of the Year award went to Emmanuel Bellas (VFS) head coach of the Platinum Football Team. In 2018 Emmanuel earned himself a C License and is now the only coach in Saint Lucia to hold such a prestigious coaching certificate.

He got the nod over Francis Daniel of (Valley Soccer) a D License coach. Daniel has established a pool of coaches in his club who undertake the development of a number of youth teams as well as the very successful senior team.

Gilroy Lamontagne of (Soufriere) is also a D License coach and has been coaching for the last 10 years. He is committed to the development of football at his club, Black Panthers and his District team Soufriere at the national level.

For Coach of the League, Emmanuel was good enough on the judges’ cards to eclipse Ashley Duncan of (Laborie) and Manasseh Edward of (Marchand). Emmanuel continues to transition successfully between administration and coaching. In 2018 he successfully won the Blackheart title and the SLFA under -23 Men’s Championship becoming the only coach to win two major championships in the year under review. Emmanuel was selected to undergo training by CONCACAF to be a Caching Instructor for our Region.

There was more good news for the VFS Football League and Emmanuel Bellas, as the latter took home the Administrator of the Year award.

A number of sponsors were recognized on the evening; South Shoe Store, Scotts Sports and Awards, National Lotteries Authority, the Ministry of Youth Development and Sports and the Castries City Council.