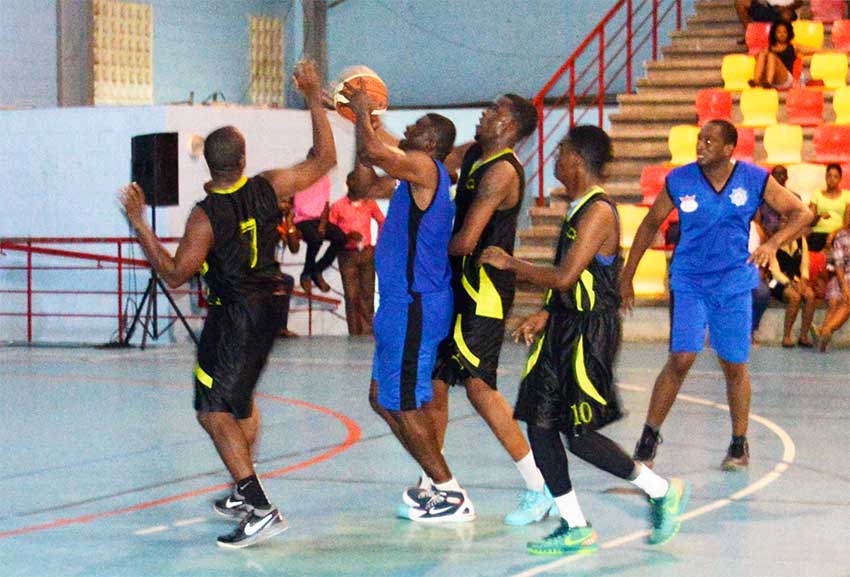 THE excitement and friendly rivalry on centre court in the 2018 Commercial Basketball League (CBL) organized by the Saint Lucia Basketball Federation (SLBF) in collaboration with the Saint Lucia Chamber of Commerce, continues with a double header at the Beausejour Indoor Practice Facility on Wednesday 12th September.

Coming out fresh from their 72-69 win over Sandals Blazers on the opening night of the championship, Financial Services with SharmoirJn Baptiste, Marlon Samuel, Dilan Biscette, Rahim Auguste and Bertlin Alexander in their lineup will take on the Royal Saint Lucia Police Force.

The law enforces with Durocher Antoine, Randy Charles, Amil Octave, Shervon Mathew, Mervin Charles and Kerlinus Augustin in their lineup will have to pull all stops against a strong Financial Services team as they went down 66-40 in their first game of the championship to the Saint Lucia Fire Service.

Meanwhile on day two, Wednesday 5th September, the Saint Lucia Fire Service maintain their winning ways against their counterparts the Royal Saint Lucia Police Force despite being short of a full team at the start of the encounter; the firemen was still able to dominate against their opponent winning 66 -40 at the end of the final whistle.

SLFS led 39-24 at the halftime whistle; coming out of the third quarter SLFS was able to hold the RSLPF to a four point only quarter which by all indications is probably the lowest quarter score in the history of the CBL.

The RSLPF came back in the 4th quarter scoring only 2 points less than the SLFS; however it was not enough to earn the win.

Leading scorer and Saint Lucia Sports Online Player of the Game was Gabriel Inglis with 28 points, 7 rebounds. National player and captain of the national senior team Marcian Calderon assisted with the win with his double double of 16 points and 11 rebounds.

For the RSLPF, Durocher Antoine had 9 points, 7 rebounds and 5 steals.

In Game two of the night, the Sandals Blazers after going down in a tough encounter in their first game against Financial Services which went into overtime, came out stronger and defeated debutants the Royalton 71-49 in a match dubbed “Battle of the Hospitality Industry” .

The combined offensive and defensive power of Keegan Preville and Glenn Antoine was too much for Royalton.

FLOW co-player of the game; Keegan Preville and Glenn Antoine each had a double double, Keegan with 17 points, 16 rebounds, 5 steals and 5 assists and Glenn with 21 points, 11 rebounds.

First timers Royalton seemed to have started off the game quite nicely by only being down by 5 at the end of the first. In the second quarter it seemed like they had lost their momentum and Sandals dominated that quarter 22-9; the third quarter was a similar outcome where they were outscored 21-11.

In the fourth quarter, Royalton gave a fight and won that quarter by scoring 18 points to Sandals’ 12 however it was not enough at that stage to bring them back in the game.