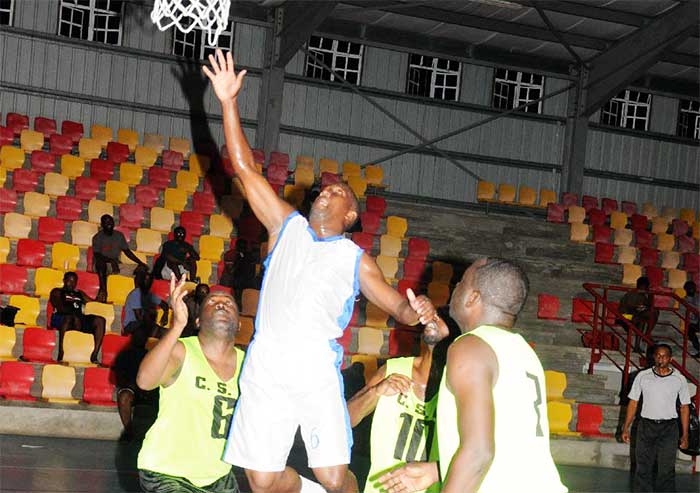 THE excitement on centre court in the 2018 Commercial Basketball League (CBL) organized by the Saint Lucia Basketball Federation (SLBF) in collaboration with the Saint Lucia Chamber of Commerce continues next week at the Beausejour Indoor Practice Facility on Wednesday 19th and Thursday 20th September.

Two games are on the card for the following day — Saint Lucia Teachers Union will play CSA from 6.00 pm and the Royal Saint Lucia Police Force versus Royalton Resorts at 8 pm.

Meanwhile, on Wednesday 12th, despite a small crowd in attendance at the BIPF as most individuals stayed away as they kept a close eye on Tropical Storm Isaac, there was quite a bit of excitement on centre court.

In Game 1, CSA defeated WASCO 60-49. At the end of the first quarter and by all indications it looked like this one would be a closely fought game with WASCO leading by 2 (12-10). The CSA team quickly switched into high gear going into the second quarter and did not look back to claim victory.

The Saint Lucia Sports Online Player of the Game was Nye Guard with 8 points, 9 rebounds, 3 steals and 4 assists.

For WASCO, Zepthan Fontinelle was the lead scorer with his double double of 22 points and 16 rebounds.

In game two, Financial Services defeated Combined Forces (The Royal Saint Lucia Police Force) 67-45. This was the RSLPF second defeat in as many matches.

Starting off with a first quarter score of 22 and holding off their opponents to only 12 points. The second quarter was a bit more impressive for the Combined Forces; however the third quarter seemed like a challenge with a 7 point only quarter and their opponent with a 18 point quarter.

Notable players for Financial Services were Sharmoir Jn. Baptiste and Rahim Auguste who impacted their team’s win as they were awarded Co-Flow players of the game. Sharmoir Jn Baptiste had 17 points, 11 rebounds another double double in this CBL and Rahim Auguste had 9 rebounds, 6 steals and 9 assists.

Lone Player for the Combined Forces with double figures was Amil Octave with 12 points.