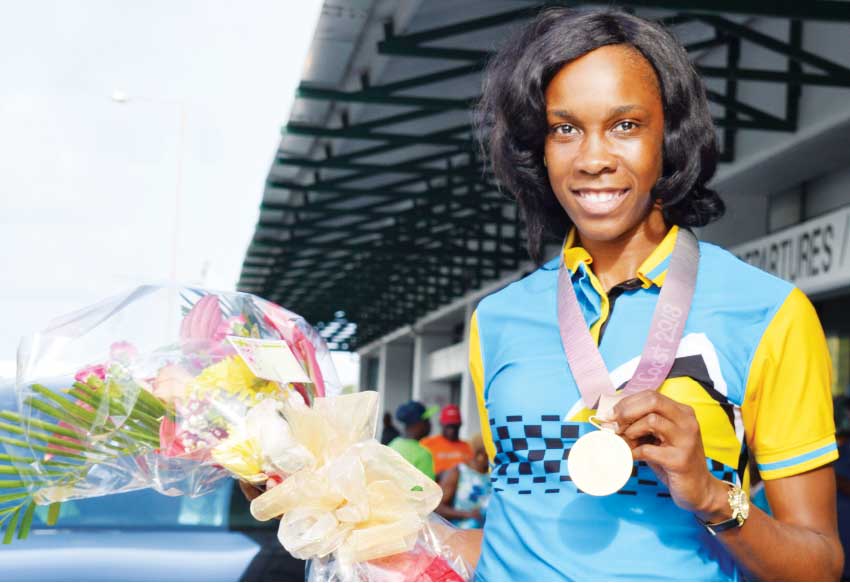 The dynamic Saint Lucian athlete did it over the weekend at the Varsity Stadium in Toronto, Canada, where Spencer cleared 1.91 metres for the gold on Friday evening.

The Saint Lucian and Caribbean high jump Queen, at 34, was the oldest athlete in the event.

On her way to winning the gold medal, she defeated 30-year-old Elizabeth Patterson of the USA in dramatic fashion to top the medal rostrum.

Spencer entered the competition at 1.82 metres, at which height she needed two attempts. She required only one jump at 1.85 metres — and with only Patterson for company at 1.88 metres, she passed again, putting pressure on the American.

Patterson had to take all three tries to go clear at 1.88 metres, which she did, leaving Spencer to clear 1.91 metres for a chance to win – and that she did, on her second attempt. Patterson, unable to win at 1.91 metres, moved to 1.94 metres for her last attempt.

But it was not to be for Patterson and her Saint Lucian and Caribbean rival continues a sensational year of international representation.

According to her local manager and mentor, Gregory Dickson, Spencer’s next international stop will be the IAAF Continental Cup in Ostrava, The Czech Republic, where she will represent the Americas. The two-day event will be held on Saturday 8th and Sunday 9th September.

The IAAF Continental Cup is the only athletics competition in which athletes represent entire continents.

With no senior outdoor global championships taking place this year, the IAAF Continental Cup, Ostrava 2018, will be one of the highlights of the athletics calendar.

Meanwhile, there has been a video footage circulating, during the medal presentation, in which the wrong national anthem was played for Spencer.

Spencer could have been seen indicating that it was the wrong national anthem, but it’s not clear whether those responsible understood her signage..