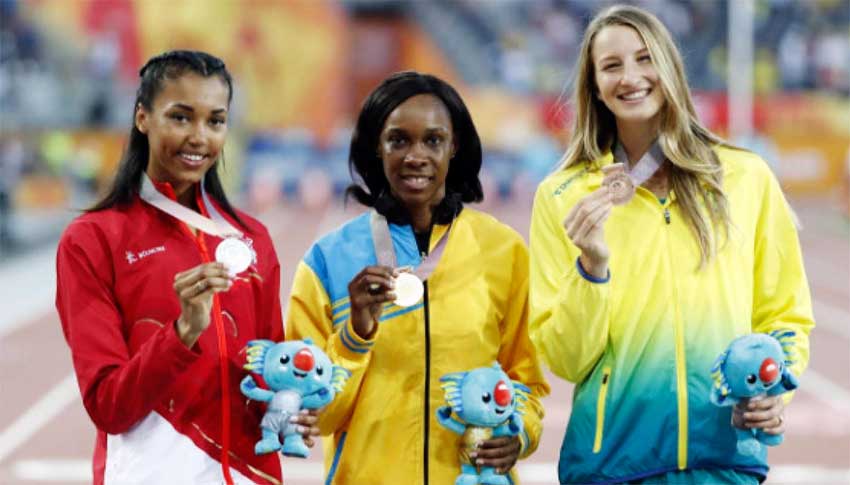 SAINT Lucians are in a state of elation following the historic success of 33-year-old Levern Spencer, who won our island’s first Gold Medal at the Gold Coast 2018 Commonwealth Games in Australia.

The Government of Saint Lucia will celebrate Spencer’s victory and the Cabinet of Ministers and sports officials are already discussing honouring Spencer’s accomplishments.

The Babonneau native soared to greatness when she jumped 1.95m in the women’s high jump, in the wee hours of Saturday morning pushing past the United Kingdom and Australia, who took silver and bronze, respectively.

Speaking from the Summit of the Americas in Peru, Saint Lucia’s Prime Minister Honourable Allen Chastanet explained how proud the country continues to be of Spencer.

“The people of Saint Lucia are so proud of Levern. Many stayed up to watch her historic jump while others found out early in the morning and the response has been phenomenal. This has deep meaning for us because we have watched her grow up before our eyes, been there in the ups and downs of being athlete. Levern was already a Saint Lucia Legend and now Levern Spencer has given our country even more reason to celebrate.”

Minister for Local Government and Culture and President of the National Olympic Committee, Honourable Fortuna Belrose, told the press on Monday that she stayed up all night and into the morning to watch Levern.

“Saint Lucia has achieved a milestone that many countries in the world are yet to reach,” Minister Belrose told the media.

“The significance of this medal that she has won is phenomenal. Levern has been on the circuit for over 18 years and she has been able to realize this goal for Saint Lucia.

“For young people in this country it communicates the message that sometimes it takes time but if you work at it, if you stick to it, you can achieve the goals.

“And sport is really a great tool to demonstrate to young people how best they can stay focused on their goals — and realize them.

“She has made us significantly proud, tremendously proud, and I think it is something we all should celebrate.”

The Minister called on Saint Lucians to show Spencer support when she arrives back home by giving her a hero’s welcome.

Minister for Youth Development and Sport, Edmund Estephane, speaking from the Commonwealth Heads of Government meeting in London, says that this achievement by Spencer gives us even more reason to celebrate her 20 years as an athlete for Saint Lucia.

“Levern has done us so proud now and in the past,” said Minister Estephane.

“She is an example of discipline and dedication and we had already planned to celebrate what she has done for our country in the athletic circles and on a whole in terms of bringing attention to our country.”

Following her Gold win Spencer was quoted as saying: “It’s a really good feeling and I am happy I’m the one making history for my country.”