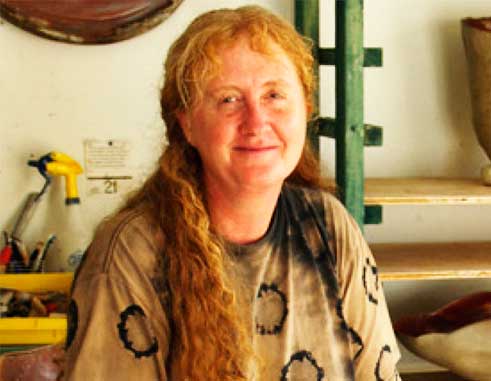 She will also be launching her new publication Creole Clay: Heritage Ceramics in the Contemporary Caribbean. The volume documents twenty-five years of research with potters in the region.

Patricia Fay is a Professor of Art in ceramics at Florida Gulf Coast University in Fort Myers, FL. Much of her research was conducted in St. Lucia.

Creole Clay is the story of traditional potters working today in Saint Lucia, Nevis, Antigua, Jamaica, Barbados, Trinidad and Guyana, and the diverse global influences that have shaped their work. The author’s talk will emphasize new research specific to heritage ceramic production in Saint Lucia, and celebrate decades of collaboration with St. Lucian potters, teachers, historians, and cultural agencies.

Several reviewers of the book have praised Ms. Fay’s research:

“Weaves a complex history that links the Ca¬ribbean with Africa, Europe, the Americas, and India and draws together threads from indigenous cultures to the impact of the slave trade, indentured workers, colonial rulers, postcolonial politics, and global tourism.”—Moira Vincentelli, author of Women Pot¬ters: Transforming Traditions

“In the field of indigenous ceramics, cross-regional research is becoming increasingly important for potters, students, and scholars alike. Fay establishes a solid base for both further regional research and global com¬parative work.”—Elizabeth Perrill, author of Zulu Pottery

“Provides a historical and social context for the heritage of traditional ceramics in the contemporary Caribbean and at the same time grounds it in the everyday practice of potters.”—Mark W. Hauser, author of An Archaeology of Black Markets: Local Ceramics and Economies in Eighteenth-Century Jamaica

Beautifully illustrated with richly detailed photographs, this volume traces the living heritage of locally made pottery in the English-speaking Caribbean. Patricia Fay combines her own expertise in making ceramics with two decades of interviews, visits, and participant-observation in the region, providing a perspective that is technically informed and anthro-pologically rigorous. Through the analysis of ceramic methods, Fay reveals that the traditional skills of local potters in the Caribbean are inherited from diverse points of origin in Africa, Europe, India, and the Americas.

At the heart of the book is an in-depth discussion of the women potters of Choiseul, Saint Lucia, whose self-sufficient Creole lifestyle emerged in the nineteenth century following the emancipation of plantation slaves. Using methods inherited from Africa, today’s potters adapt heritage practice for new contexts. In Nevis, Antigua, and Jamaica, related pottery traditions reveal skill sets derived from multiple West and Central African influences, and in the case of Jamaica, launched ceramics as a contemporary art form. In Barbados, colonial wheel and kiln technologies imported from England are evident in the many productive clay studios on the island. In Trinidad, Hindu ritual ves¬sels are a key feature of a ceramic tradition that arrived with indentured labour from India, and in Guyana potters in both village and urban settings preserve indigenous Amerindian culture

Fay emphasizes the integral role relationships between mothers and daugh¬ters play in the transmission of skills from generation to generation. Since most pottery produced is intended for domestic use as cooking pots, serving vessels, and for water storage, women have been key to sustaining these traditions. But Fay’s work also shows that these pots have value beyond their every¬day usefulness. In the process of forming and firing, the diverse cultural heri¬tage of the Caribbean becomes manifest, exemplifying the continuing encounter between old and new, local and global, and traditional and contemporary.

Creole Clay is a volume in the series Latin American and Caribbean Arts and Culture, funded by the Andrew W. Mellon Foundation.

The public is invited to attend the lecture and book launch.