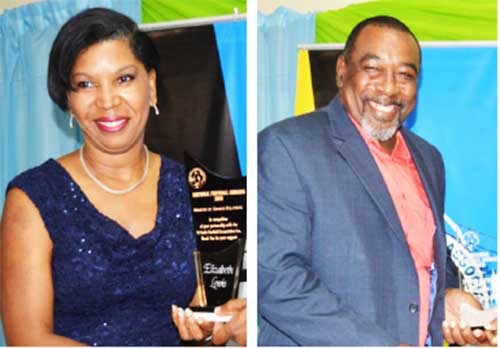 THEY are better known for their prowess on the football pitch. However, this time around, there was no letting up by Vieux Fort South as they made yet another clean sweep for the second year running at the Saint Lucia Football Association’s annual awards recently held at the Palm Haven Hotel.

These awards are based on special performance criteria which determined the level and impact of the contributions made and its significance to the continued development of football in the year 2017.

Two out of the four sports personalities were on hand to collect the awards for male and female footballer of the year. Shakira Barclette received on her brother’s behalf Vino Barclette, while Sebastien Ribot’s father collected on his behalf.

A member of the national female under-17 and Vieux Fort South Under-15 team player, Krysan St. Louis, is one of the most skilful, most exciting and explosive player to watch on island. She is an ambassador of the remarkable female product on the island and was a wonderful spectacle at last year’s CONCACAF Under-17 championship held here. She also helped her club win the SLFA Under-17 Tournament scoring 14 goals in the process.

Junior footballer Sebastien Ribot work ethics is remarkable; his staunch attitude and undying persistence towards the game is exemplary. He has displayed consistent growth in his footballing dexterity and also maintains his selection as the primary centre-back for team Saint Lucia.

Senior footballer Ellisa Marquis’ technical level is unparalleled as she sits in a class of her own on the national scheme. Her amazing poise and football intelligence led her to capture the award of best midfielder at the Windward Islands female championship held in Saint Vincent and the Grenadines.

Seeking further game knowledge, she completed her CONCACAF “D” License course and now uses her expertise to bestow upon the young women in her community the basic technical fundamentals of the beautiful game.

Senior footballer of the year, Vino Barclette, captained the Saint Lucia national team which participated in the Commonwealth Youth Games in the Bahamas, where Saint Lucia secured its first-ever team gold medal.

Barclette represented VFS in the SLFA under-22 and senior championships. He captained the under -20 national team which participated in the Vizions Super League, which qualified for the finals, but went down to Canaries in the finals 1-0. He was also awarded the goalkeeper and MVP of the 2017 Blackheart Tournament.