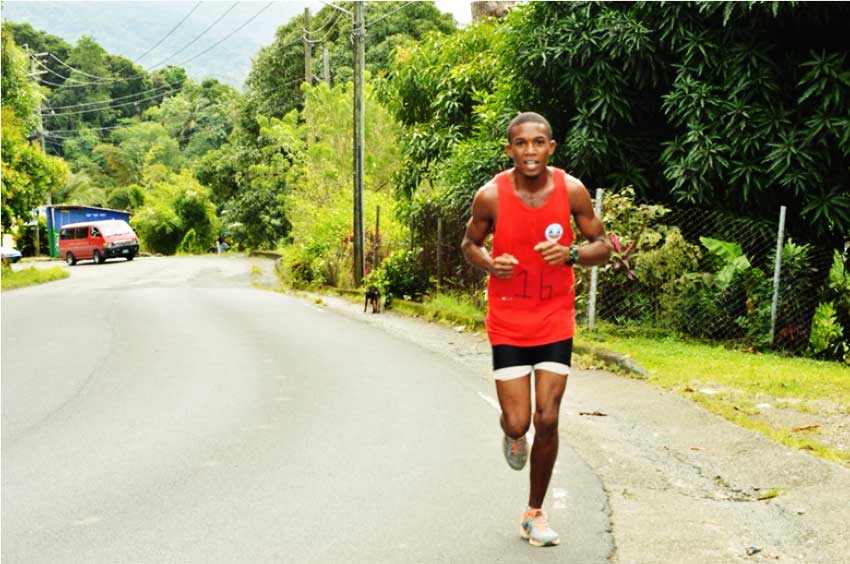 On the verge of quitting his fledgling sporting career due to financial strain, knowing that he would not be able to keep up with training payments, he saw the proverbial light at the end of the tunnel when he received financial assistance from Sandals. “As a result I was able to continue training and now at my best, from a field of 80 participants, I was able to recently dominate the 6K Sir Arthur Lewis Community College Road race, shattering the record with a new time of 28.05 minutes.” The race took in the scenic route along the lower Morne Road from the Morne Bakery south to Cul de Sac and back to the school.

Sports has become more than just a passion and Ange has spent many- a- day gaining experience in a number of events. At his young age, he is a veteran on the road, having participated in the St. Mary’s College (SMC) Marathon a number of times.

He credits his Principal at the time, Mr. Rowan Seon, for recognizing his potential and investing in him, allowing him to receive training from the Rockets Athletics Club. This would allow him to dominate inter-house sports at the St. Mary’s College in the long Distance races; 800 metres, 1500 metres, and 5000 metres respectively, setting a record for the new SMC Marathon route which still stands today.

His sports prowess earned him the nickname “The Beast”, and he graduated with the Sports Award and the Principal’s Award from SMC.

His first year at Sir Arthur brought victory in the Marathon and domination in the Middle distance races, as he went on to Conquer the 5000 metres at the Inter-Secondary school Games clocking a time of 18.35 minutes, a personal best, however 1 minute and 35 seconds short of the qualifying time for CARIFTA games.

Ange says that his current goal “is to represent Saint Lucia at the CARIFTA GAMES this year held in the Bahamas and bring back the Gold. Later, I intend to pursue a sports Scholarship to study Environmental Economics as a double major, and having been interested in sports since 6th grade, I would like to represent my country at the Olympic Games.”