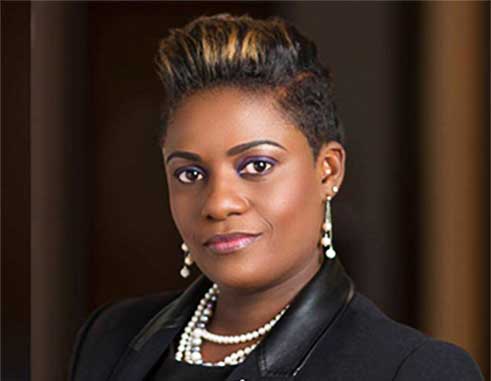 Scotiabank’s Wendy Delmar at the helm.

PRESS RELEASE – A new executive has been appointed to lead the affairs of the Saint Lucia Bankers Association for the term. Ms. Wendy Delmar of Scotiabank is the new President, while CIBC FirstCaribbean’s Country Manager, Mrs. Ladesa James-Williams holds the office of Vice President. RBC Royal Bank Country Manager Mrs. Sandra Fontenelle serves as Secretary while the office of Treasurer is held by the Bank of Saint Lucia, represented by Mr. Baldwin Taylor. Responsibility for the Association’s public relations is now under the oversight of 1st National Bank’s Managing Director Jonathan Johannes.

The new President, Ms. Wendy Delmar, is the Branch Manager for Scotiabank’s Castries branch. In this role, she is responsible for the overall success of the branch including retail and small business segments. Ms. Delmar’s career in Banking began when she started as Teller. Her acute business acumen and keen attention to detail propelled her steady rise. Upward trajectory soon led her to assume several senior roles including Implementation Officer, Commercial Account Officer and later Home Finance Specialist. Later, she assumed the role of Manager Sales and Service Coach (Retail and Small Business) in Barbados with direct responsibility for the coaching, testing and launching of new Banking initiatives and sales and service disciplines. During this period she received several certifications including “Coaching for Excellence,” Sales Leadership” and “Front Line Situational Leadership.” A proven results-driven leader, Ms. Delmar holds a Master’s degree in Global Human Resource Management (University of Liverpool).

Over the three-year term ahead, advocacy, education, value to members, visibility and operational efficiency will constitute the main pillars of the association’s work programmeme. According to Ms. Delmar, the BA’s ability to deliver value to members and to be effective in its public education programmes “is dependent on the effectiveness of our own collaboration and alignment with key strategic partners such as the Chamber of Commerce, Institute of Chartered Accountants, the Caribbean Association of Indigenous Banks, the insurance and legal sectors”. To this end, the association will focus on strengthening its partnerships with lead stakeholder communities to exploit a joint approach to achieving its mandate. Key among these are increasing financial literacy across all levels of society, awareness of trends and their implications within the regulatory environment, and contributing to financial growth and stability in keeping with the vision of the Eastern Caribbean Currency Union.