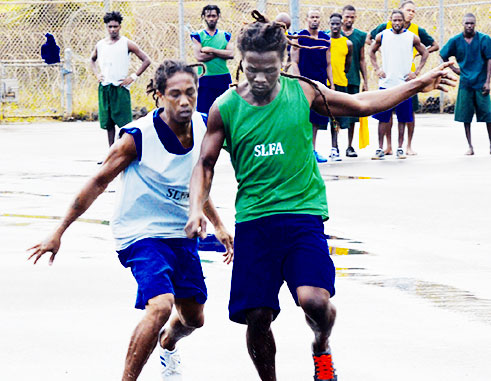 LAST Friday’s inclement weather did not curtail the excitement and the entertaining football played at the Bordelais Correctional Facility in Dennery amongst 30 plus inmates.

Six units participated however inmates were asking for a grand final between the two units with the most points, but time and the deteriorating weather conditions did not permit.

The two games played was part of the celebrations held for three long serving officers who had given 20 unbroken years of service to the institution. The in-house games were also used for preparation for the annual BCF Premiere League scheduled to kick off in two weeks’ time.

Jim Anderson Williams said – “It is part of the rehabilitation programme to ensure we have discipline amongst the inmates, to ensure the inmates understand the game, have comradery amongst themselves in a peaceful and loving atmosphere”.

“It is a tool that we used at the BCF to ensure that there is discipline. We have partnered with the Saint Lucia Football Association and it is reaping fruits. To date we have had not only officer’s train, likewise inmates in coaching; it is working out very well for the BCF”.

The inmates are now using what they have leant and they are putting it into practice both on and off the court. It is working out tremendously for BCF. William said, “We are extremely proud of its rehabilitation project in terms of football and other activities”.

It terms of the level of play on the pitch, “I am very impressed, it is credit to the hard work we are putting in at the facility. We are showing the inmates that there is discipline not only on the court, but at the facility. For the inmates to come out to play a game football in such numbers, you are not hearing no cursing or seeing any fighting it is showing we are doing a fantastic job”. He noted.

This was conceptualized by the BCF Director, Vern Guard, who ensured that the BCF give the inmates an opportunity to harness their true potential.

The countdown has begun for the annual Directors Trophy, dubbed “The BCF Premiere League”. The tournament is widely anticipated by the inmates, and it is something they look forward to. The BCF give them an opportunity to play on a large playing field. The tournament format includes the preliminary round, quarterfinals, semifinals and finals between the various units and officers. The inmates are the defending champions.

Apart from the football component, the BCF is also preparing for cricket and basketball. It is not only the inmates that are involved in the various sporting disciplines, BCF officers are also part of the various tournaments.

Correctional Officer 1, Yasmine Peter said, “Sports play a major role at the BCF when it comes to discipline, and the inmates are very enthusiastic about the football games. Last month we had an external football match where the inmates were taken to the Wenn playing field in Mon Repos where they played against the officers. Inmates who were well behaved were chosen. We actually reward inmates who behave to the expectations or keep the rules and regulations of the BCF”.

She continued, “To date we have realise some successes with our football activities, the discipline is getting their amongst the players. The coach – one of the inmates who did the CONCACAF / SLFA D -Licensing Course last year. This inmate has been given the opportunity and has been giving back to the BCF by coaching the inmates with their football skills and also helping them with their discipline level”.

Peter said, “The partnership with the SLFA is a great one. I am very passionate about rehabilitation at the BCF. I think an inmate should not leave the facility the same way he or she came. We should try our best to make whatever changes that we can to help this inmate become a better person upon reintegrate into the society”.

Meanwhile, CONCACAF D – Licensing coach, Clinton Gilbert said, “It was a fantastic event put together, that’s the best thing for us to help with our rehabilitation. The standard of play is getting higher; some of the players that were on show also have football ability. I just put them together and everything seems falling in place”.

In terms of defending last year championship win against the officers, Gilbert said, “We have a lot in store, my players are all set and ready; but I won’t put out the secret just yet, but rest assured we will win again”